SPACE MIRRORS, behind the scenes of “The Other Gods” (Martyr Lucifer) part 1

Metalhead told you about the new album of Space Mirrors, “The Other Gods” (here), and interviewed Alisa Coral (here), the mastermind of the band, a talk made possible by Martyr Lucifer, Alisa’s bandmate, he is in fact Space Mirrors’ singer. Metalhead  abused of Martyr Lucifer’s kindness, asking the singer to explain how the album was born. Here, in exclusive, are his impressions and the video of “She Devil”. 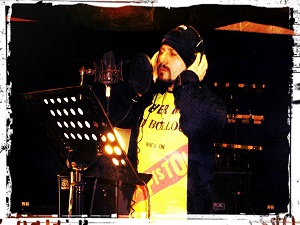 The concrete idea for “The Other Gods” was born around January / February 2012, when Alisa and I have been exchanging the first emails regarding the new songs. But actually, the general idea was born with “In Darkness They Whisper”, the previous album, which was the first in a trilogy dedicated to (or rather, inspired by) H.P. Lovecraft. So the drafting of the pieces began, in fact, a year and a half ago, and Alisa being the mastermind of the project, is responsible for writing all the music and the lyrics, so I was left waiting for her demos to arrive to begin writing my vocal lines.

It’s a process to which I dedicate a lot of work and attention, because let’s say that working with Space Mirrors has always represented for me some sort of challenge, as space rock is a genre that I had not even ever heard, previously. Even if defining the sound of Space Mirrors as space rock is very limiting, as you may encounter elements from other genres such as prog, symphonic, heavy metal, gothic, etc..

Alisa has always given me carte blanche for the vocal lines, she blindly trusts my vocal style and ability of interpretation, but I’ve never hesitated to ask her advices or tips on what she would have liked me to do. This method works, it helps me to get more in tune with the songs. There is also to say that in my main previous projects I was also author, partly as teamwork in Hortus Animae and completely in my solo project Martyr Lucifer (and marginally also with Opposite Sides, for lyrics and some arrangements), therefore the role of a mere interpreter was initially strange to me. But, come on, it is also relaxing, I go in the studio, sing and then sit on the couch dispensing advices on mixing ahah!

But, being now a permanent and stable member of Space Mirrors, in “The Other Gods” I proposed Alisa the music for a song, the opener “Stranger in the Mirror.” It is a very energetic song that goes well with the sound of Space Mirrors and I want to clarify that I did not send Alisa a song that I had discarded from Hortus or ML, but that was written specifically for SM. This thing was very refreshing to me as well, as the scores were then entrusted to musicians that I do not personally know (except the guitarist for that tune, Amon 418, who has played with me in Hortus Animae and Opposite Sides), and so I was very excited to hear how  the end result would be! From this you can understand that we have never met in the studio, none of us. Except for Claudio Tirincanti, drummer for Blaze Bayley and current drummer in permanent position in Space Mirrors, who lives in my area and we have already played together years ago.

I have recommended him to Alisa, he’s a very good and versatile drummer and he’s also perfect for the live feeling that she wanted for the new songs. Even with Amon we hadn’t met in the studio, because he had moved to live in Germany, so he worked at distance. But nowadays working remotely has become some sort of normality even for people who live in the same place, it is practically the way I’ve recorded my recent EPs, where I collaborated with musicians of my area (except for Antarktica and Adrian Erlandsson) but in any case we have always worked with a lot of file-sharing. Well, I mean, in the end working remotely is absolutely not a problem nor it’s limiting. You just need to have very clear ideas when entering the studio. You can improvise in the rehearsal room or while you write, but when you enter the studio you gotta be prepared 100%.