A TRANSYLVANIAN FUNERAL, “typically I write an album for 6 months and then spend 6 months promoting it, etc..” 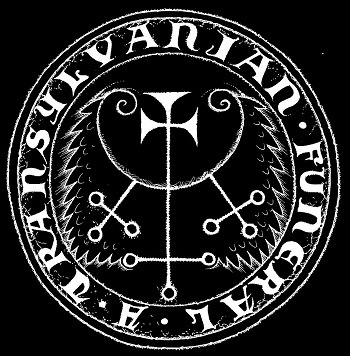 The release of “Gorgos Goetia” gave me the opportunity to better know what’s behind A Transylvanian Funeral, a black melta one-man-band that I managed to be aware of thanks to a split I put my ands onto few month ago. Sleepwalker, from USA, is the man behind the project. He released several works, and his own music pushed him toward the creation of his own label. Sleepwalker is a completely black metal oriented musician, but his releases politic and his vision of the music, reveal a very reflective and forward-looking personality. (versione italiana)

Can you describe your belonging to Black Metal? Is it an expression form only? Is it just music? Is it a philosophy? What does black metal mean for you?
Black Metal is all things at once, to me. It is the air that fills your lungs when you gaze across a mountainous reach or behold the sun setting or the moon rising. The music is not meant to have boundaries nor is it meant to be consumed by everyone like a fashion fad or junk food trend. Black Metal is an expression of the individual who is creating the material, hence the wide variety of sub-genres. If it sounds ‘depressive’, chances are the musician who wrote the piece was depressed at the time. Personally, I believe in my ability to conquer and overcome obstacles successfully and to further my quality of life. I try and empower my music and my listeners the same way.I enjoy exercising my Will and my Magickal tools, in this aspect, are the recordings I release.

I’ve been writing about you for a split with Plutonian Shore. Do you believe “splits” are still a useful way of promotion for musicians?
I suppose, yes. It really depends on each band’s individual effort input. If band A relies on band B and B on A for the release to be a success, then it will be worthless, as anything else without the application of proper effort.

You last effort is titled “Gorgos Goetia” (in which there are four tracks out of the above mentioned split), but you recorded three more albums and three more splits. Looks like you keep writing a lot of music!
I certainly enjoy it. I wish I could spend more time in the studio writing than I do already. I rarely write unless I have several months to do it. I am bad about writing all year long, typically I write an album for 6 months and then spend 6 months promoting it, etc. It is what I enjoy the most of any of the responsibilities I shoulder, from the label, to the zine and the band…

Is Forbidden Records your own label? Can you tell me how is it going on? I’ve noticed there are a lot of sold-outs among the catalog offer.
Forbidden Records is my own label, it grew out my studio and my desire to release my own material without having to wait on someone else to do it for me. A Transylvanian Funeral’s S/T debut and sophomore album, ‘the Outsider’, are both sold out, as well as a few other releases from the label. I have started small with limited runs of 100 in order to preserve the longevity of the label. Nothing like spending thousands of dollars on a new band under a new label with no way of effectively promoting it. This March, with the release of ‘Gorgos Goetia’ and Goatcraft’s ‘All For Naught’, I was able to release full Redbook CDs and hire Clawhammer PR to properly promote the two albums. So far the response has been excellent and there are plans to honor my two older albums with re-releases, lyric books, etc.

You use Bandcamp, don’t you think it is a very useful media to spread your music round?
I do, otherwise I would not use it. There is a lot of idle chatter about mp3’s not being fucking grim enough for true black metal or whatever and that is fine. Everyone has a soapbox to stand on when online and complain to an audience of spam-bots. But on the same token, for years, bands complained about not being able to get exposure and get the attention of fans and potential labels. Now those same bands complain about the scene being over-saturated with artists and the music becoming disposable. I suppose the only solution is to write better music and get noticed. It is best that before one complains about their surroundings, they turn their gaze inward and search for a way to evolve, adapt and survive.

(Alberto Vitale)
Thanks to Luca Zakk for his help