ADDICTION FOR DESTRUCTION, “We are friends kicking ass professionally” 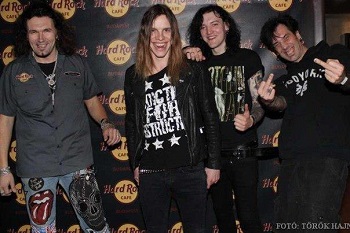 Addiction For Destruction came out from nowhere in the kingdom of the eastern block. They strike down from Moscow, Russia, offering a solid and great sleaze rock, sounding so powerful, so dynamic and so damn original. They get inspirations from the old great acts like Guns ‘n’ Roses, but they got personality, a strong identity, and they are highly focused on their main target: rock the world! During the Italian tour, I got the chance to enjoy their gig at the Old Saloon, and stealing some of their time to grab this interview with all the band sitting around me, few minutes before the gig. (versione italiana)

Hello Guys! So, it seems quite a tour for a band that isn’t widely known yet. How does it feel to be on this tour around Europe?
Tom Spice: It is great, you see a lot of people, we make friend, and it’s great to see that people like your music, come to your show, hanging out, it’s great.

Three gigs in Italy. This is the 3rd one. You work with Atomic Stuff and also Heart Of Steel for digital market. Can you tell something more about this “Italian love” of yours? How is the relationship with Italy?
D.McKay: You know, it is great. Actually Stefano (of Atomic Stuff, ndr) was the first guy who showed his interest to work with us, now we keep on with him, there is all the press,  the relationship is great, we have better results here in Italy than in  our country, Russia.

Feedback from Italian fans on the past two gigs? How did public react to your music?
D.McKay: In Roh it was very good, people very happy, and shot much photos, hanging out after show, and also Fiesse was very good, a lot of people.

Now some more complex questions. You’re from Moscow, one of the old symbols of dead political systems, but you play a music that finds its origins on the other side of the world, somehow the opposite of your culture. How is it, today, playing hard rock music in Russia?
D.McKay: You know it’s very though to play any kind of western music in Russia, because in people’s mind… they don’t like when you sound like americans, you know, blue stuff… it’s not traditional in Russia. That’s why american market is more open to us than the domestic market.

As a webzine we’re getting tons of stuff from the east block. New bands, new idea. Some of the are very very good. You belong to this “very very good”…
All: Thanks!

Can you tell more about the arising metal scene from eastern countries? How is the scene? Is it possible that the Moscow of today sounds like a Los Angeles like it was in the 80s? Like something new is arising…
D.McKay: I don’t think so, unfortunately most bands are low quality, and that is first because of the culture, like people started to study guitars and drums when they were 15, while in Europe they start much earlier. And in Europe and the States the music traditions are very different, and of course the price of the gear, not much people can buy a good guitar or good amplifiers to do this, because of the money, I don’t know… nowadays I think Stockholm  must be the new Los Angeles because all of the bands, new bands, from the eastern block are all inspired by them. New bands come from Sweden or America, but 90% are great bands from Sweden. 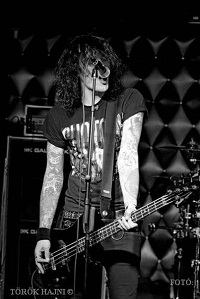 Addiction For Destruction: few friends rocking around? A gang you better not fuck up with? A professional band. Tell me about the relationship within the band.
D.McKay: You know all of us had previous bands,  previous experiences, but we are friend since the times before the band, and one day we decided to start as a band with our experiences. So it’s 50/50.

Tom Spice: So we are friends kicking ass professionally. (laughs)

Can you live in Russia as a band or are you forced to do a daytime job? Any government support for artists (like in Norway)?
All: Noway!

D.McKay: Nobody cares in Russia about this. Yes, we have some jobs, but they are related to music, Tom is a student, and the other guys do some business like rental of backlines, selling guitars, still related to music, but we need to do this now.

Krock: I Only Play!

D.McKay: He only plays drums…

Fantastic, it is the dream job!
All: yeah! (laughters)

With a Danish guitar player: where do you rehearse? Or practice… In Denmark? Russia?
D.McKay: He lives in Russia….

I noticed a very good english on your songs. Not so obvious. The past week I’ve been in touch with a band and their lyrics was really poor english. How did you get such a good english? Is there in Russia a good school or did you just practiced travelling?
D.McKay: You know I’ve been studying english since I was four years old. And when we recorded the album we had some coaching, we had a woman from San Francisco who was looking at the lyrics and trying to delete the accent from the voice, so we worked like this.

So behind the album there’s really a great job. Still about the language: Would it be good to do a song or a refrain in Russian?
D.McKay: No, I think that when you play american music, western music, you should do it in western traditions, and they use english.

Maybe a little piece or a refrain?
D.McKay: You know russian language has its own traditions, and it is not good in that kind of music, it’s very hard to find the right words, and to put them in the rhythmic and melody. Because russian is very good for poetry. But anyway we want to reach much more people around the world, and nowadays it’s english.

You’re soon going to Japan. Can you tell something about this upcoming adventure? Such a different place. In the 80s it was quite a must to do hard rock tours in Japan. Everybody were like “Going to Japan!”. How does it feel to go so far away?
D.McKay: It’s very exciting, I think we all know Japan is a different planet a different world. We want to  see it and of course we want to follow the 80s tradition.

“Neon Light Resurrection” was a blast. It rocks hard. How did you manage to create these powerful sounds, these catchy melodies, sounding so street, but so original as well? It’s not a copy of something that existed.
D.McKay: Because it was a long job. We spent a year for this to be recorded. Doing songs, listening and going like “noway!”. You know we wanted to bring in some atmosphere. So when I went somewhere, Finland, Sweden, and when I went to Stockholm, I felt it and understood how the sound must be created.

You did a lot of research…
D.McKay: So with such a sound we could decide: OK we want this to sound like Guns’n ‘Roses, and trying it, then maybe feeling the guitars like Backyard Babies maybe, or maybe not… so, just finding the sound.

Any new album? Are you working to something?
D.McKay: Maybe yes. We have some songs, but something for later. Now we want to use all this album can give us. Videos… And the tour, we want to continue in the summer.

Ok, let’s enjoy the gig. Close this interview saying what you want to the readers Metalhead.it
D.McKay: Thank you everybody for supporting us, listening to us, coming to the shows. This is all for you and because of you, you keep the train rolling, we love you all, we hope to come back as soon as possible, support metal and keep rocking!

Tom Spice: Of course thank you very much for supporting and let’s have a great party together!