CREST OF DARKNESS, “I’m a Satanist following in the tradition of Anton LaVey” 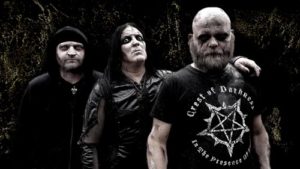 Crest of Darkness means 20 years of black metal, in the unconventional way, and they just released the great “Welcome The Dead”. I never know, whenever I interview an artist, who the hell I am sitting in front of. A freak? A maniac? Shy? Wasted? A logical mind or a pretty sick one? Well, with Ingar Amlien I felt I was talking to a brilliant mind, in full control of its art and business, and even his endless darkness appears to be driven by a cold cynic logic. And I fucking loved that, and every single words of his answers. Ladies and gentlemen, this is Ingar Amlien, this is the dark side of Crest of Darkness. (leggilo in Italiano qui)

MH: Hail there! Who thought of these questions and who’s gonna answer aren’t young guys anymore. Not on their 20s. Not even in their 30s. But a guy like me listen to this music like I used to do back in the 90s and a guy like you do play this music way better than any young artist out there. Yet you sound so young, rebel, new… How come?

Ingar Amlien: Deep inside I guess we’re both the same persons as we were twenty years ago, that’s the simple answer of your question. It’s might not the whole truth, but when all comes to all I believe it’s perhaps as easy as that. Let me explain… Most people are very enthusiastic in what they are doing in their young days, but keeping this spirit alive through a long life isn’t always that easy. I’ve seen so many enthusiastic musicians during the years. Many of them had big ambitions in the start of their careers, they were full of inspiration, they were ready to conquer the whole world! But the time goes by, the music business is very hard, you never really know what the future will bring. And then you have all the other things in life… family life, kids, and so on.. I have personally also been through all this, but for one or another reason I still love being a part of the metal scene! I’m working full of enthusiasm with new releases, I love standing on the stage… I simply love this crazy life! So yes!!! ..I still feel like a young person, and for sure I’m still a rebel! Nothing can change that!

Ingar Amlien: I had a pretty successful career together with a band called Conception in the early nineties. Conception was a melodic, progressive metal band. We released four albums, and we did some quite successful tours. I have many good memories from these years, in many ways it was the start of it all, but in the same period I did also have a lot of ideas for a more brutal band. I wanted to make much darker, more aggressive music…. Well, Crest of Darkness is the result of these ideas and visions. It’s very much the same things that motivate me to make music nowadays. Through Crest of Darkness I’m expressing the darkest sides of myself, and I’m letting the listeners get a touch of my own dark universe, my own dark world!

MH: In my review for your album I talked about darkness and violence, the ancestral ones, expressed in a modern way: in which way are you so old school, but also new, fresh and so modern that you set new limits?

Ingar Amlien: One of the main reasons why Crest of Darkness has a quite unique sound has to do with the fact that I never follow any kind of “rules”. I’m not afraid of mixing elements from different musical styles in my music. I remember in “the old days” that it wasn’t “allowed” to have melodic guitar solos in black metal music, the sound should be as dirty as possible… Even the cover art was supposed to be looking in a certain kind of way. Well, I did everything “wrong”, and many people didn’t really understand what kind of band Crest of Darkness was. Some people loved us, others hated us. But most important, we were able to create something unique, and it was a lot of discussions around the band. Afterwards I wouldn’t have done anything in a different kind of way! I’m proud of the fact that I have always followed my own ideas and visions, and in the long run that is what is most important! I actually believe that this is perhaps the biggest reason why I’m still here in this business!

MH: About those new limits: the album is raw black metal, yet it is symphonic without being symphonic, melodic with solos, but still purely black metal, and it’s also atmospheric without spending a second in those extended theatrical/FX sections widely abused nowadays. How did you do it?

Ingar Amlien: I guess I’ve already given you most of the answers of this question. I have a lot of musical experience, and I’m not afraid of using this experience when I’m writing new songs. For each album, for each song, I know what kind of atmosphere I want to create. It’s always a kind of evil undertone in my songs, something sinister… But to make my songs come alive I’m using all kind of elements without taking care of what others might think is “right or wrong”. I’m just following my own heart!

MH: Let’s talk about the lyrics. Out of the whole darkness, what shades of grey do you put into your lyrical context?

Ingar Amlien: I’m a Satanist following in the tradition of Anton LaVey. Through the years I’ve found my own way in life, I guess you’ll never find anyone like me, but I have to say that I’ve found a lot of inspiration in the writings of Anton LaVey. You could might say that it was he and Church of Satan that opened my eyes more than 25 years ago. It was the start of my life on the left hand path. My life as a Satanist, my interest for history, culture, art, poetry, movies, occultism, religion, folklore (vampirism in particular)… All this together (and much more) makes the fundament of my artistic work. 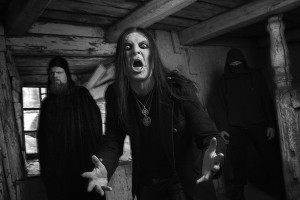 MH: I personally go damn crazy for “Scourged And Crucified”. Can’t believe that a song so, let me say it, simple can be so magnetic, catchy and… violent. How was it crafted?

Ingar Amlien: Great that you like this song so much! Thanks a lot! Well, this song was written in the same way as most of songs I’ve made for Crest of Darkness. I’m spending a lot of time making new guitar parts, new guitar riffs… All these parts of music is spinning around in my head. I’m thinking music all the time it feels like. Whatever, now and then I structure these peaces of music and make new songs out of them. Before I’m meeting the band and we’re starting to rehearse on a new song I usually have everything ready. The whole arrangement and so on… So when I’m working together with the band we’re actually working very fast, but as you understand it’s lying a long process behind my songs.

MH: Since we are at it, how was the whole album created? I mean sound direction, cover and even the title.

Ingar Amlien: When it comes to the whole concept of the album I had a pretty clear vision from the first beginning about how I wanted it to be. I wanted to make the darkest Crest of Darkness album ever! At the same time I knew that I wanted to make an album with a lot of variations. I want people to get the feeling that they’re on journey together with me and the band when they’re listening through the whole album from the start to the end. Perhaps a little bit like reading a book or watching a movie. To get this feeling it’s important that the songs, the cover, the title… all this have to work together in a kind of entirety. I spent a lot of time to figure out all this. Finding the right cover art was a big challenge, but when Francesco Palumbo from My Kingdom Music showed me some photos of the Zombie Foetus sculptures created by the Italian artist Andrea Falaschi I knew at once that this is it!!

MH: Tell me about the closing track “Katharsis”. What about it’s meaning, it’s origin and your collaboration with Espen Reboli Bjerke?

Ingar Amlien: The music of this song was made by our guitar player Rebo. He was playing the basic guitar theme on one of our rehearsals. I don’t think he really expected it to become a Crest of Darkness song at all, but we all loved his idea, and we agreed about working out something. In the studio we first recorded the basic of the song, later on Rebo recorded one of the best guitar solos I’ve ever heard! It’s so full of emotions! I just love it! This fantastic peace of music inspired me to write the lyrics “Katharsis”. One of the most important lyrics I’ve ever written! In the lyrics I’m going through the whole career of Crest of Darkness, I’ve tried to find the essence of my work… the dark energy you’ll find in all the music of Crest of Darkness. You could might say that this is my personal “katharsis”. I was very happy when the Norwegian actor Espen Reboli Bjerke wanted to do the vocal parts of this song. He’s voice is perfect for this, and it’s lifting the song to another sphere. For me it feels like that!

Ingar Amlien: The nineties… Well, we made some pretty good albums, but I guess I was still searching for something. Today I’m still searching, which is a good thing, but I’m much more clear about what I want to do! I always try to become better in what I’m doing, but Crest of Darkness has “grown up” now and in many ways I know what to do. I have a very clear vision for the future of the band. So 2020… If I’m still alive I can promise you that Crest of Darkness will also be alive! It’s not in my thoughts at all giving up this business. I’m looking forward to release more albums, go on more tours… I just love this kind of life!

MH: Plans to take “Welcome The Dead” onstage down here in Italy?

Ingar Amlien: We’ve played in Italy twice (with Shining in 2013 and Marduk in 2015), and we’d love to come back! I can’t give you anything concrete information here and now, but we’re working with new tour plans. I’ll say it’s a very big chance we’re coming back to Italy quite soon.

MH: I love to leave the last words to the artist. In the past I had any answer, from a cold “see you” to great explicit declarations involving famous religious places and mass religion idols. You message to our readers, to your fans, to the Italian fans… and thanks for your time.

Ingar Amlien: Believe me when I say that we love our fans! We’re might not the biggest band in the world, but we have the greatest fans! Some of you have followed us in more than twenty years now! Some of you have followed me since the early days when I played with Conception. This means a lot to me and the band, and this gives us the inspiration to keep on making music… We always try to make the best Crest of Darkness album ever! I do of course understand that some of you who are reading this interview don’t know Crest of Darkness very well at all…. That’s understandable, but remember that you’re always welcome to visit my Dark Universe! Infernal Greetings to All of You from me and Crest of Darkness!