DEFYING, “Fans are overwhelmed by such amount of different music. They stop with a few bands and do not follow the scene anymore” 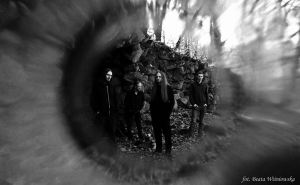 Today, MetalHead.it discuss with Tomasz and Rafał of the polish prog metal band DEFYING. We talk about the sci-fi concept of their debut album “Nexus Artificial” and about the laws of the today metal market. Enjoy reading!

Hi guys, thank you very much for this interview! Would you like to introduce the band to the Italian readers?

Tomasz: Hello! We are Defying from Olsztyn, the place well-known by metalheads as the hometown of Vader. We’re playing music which is referred as progressive or post metal. We create a quartet: Piotr is a vocalist and guitarist, Paweł is a bassist, Rafał plays solo guitar and my things are drumming and sampling.

When we think to Polish metal, we usually think to death and black bands… what can you tell us about the progressive metal scene in your country?

Tomasz: You don’t hear so much about Polish progressive metal not without reason. We have much more musicians who performs different, much extreme styles of metal. The most popular progmetal band, that I could mention here, is Blindead. This band slowly manages to reach a worldwide audience. There is also lesser-known Butterfly Trajectory, whose first full-“length” album is coming soon, but they already managed to get a bunch of fans – not without reason, because their leader Piotr Żurawski is, in my opinion, one of the best vocals in Poland, and the whole band is standing on a global level. By the way, last year we had a pleasure to play with them a tour and I have fond memories of it (laughs)

Rafał: Progressive and post-metal scene is pretty strong in Poland. In adittion to Blindead mentioned by Tomek I would like to add Disperse, heavy but very technical Decapitated, Dianoya, Division by Zero or lighter Riverside. The latter band is the greatest progressive band in our country and they achieved worldwide success.

Still about metal in Poland: do you think that things are better now with relation to the last 10/15 years? Is there more interest today in metal music in your country?

Tomasz: When considering how many people comes to gigs – it does not look good, and for now nothing will change. The old bands, that became popular years ago, can always count on large audiences, but for bands like us it’s very difficult to build a group of fans. I think that there is still interest in that kind of music, perhaps even greater than before, but people do not turn out – simply because it’s harder to attract them into smaller concerts with local bands.

Rafał: Today we have very large competition and although the internet is very helpful in accessing the fans, you have to remember that every band can use it. Finally, fans are overwhelmed by such amount of different music. They stop with a few bands and do not follow the scene anymore. Of course there are maniacs, but not a lot of them.

And what about the concept that supports your last album “Nexus Artificial”? Do you really think that human kind is an extra-terrestrial creation?

Tomasz: Personally, I don’t really believe in ancient aliens (laughs). We only used this theory. In our concept, it’s an extraterrestial beings who accelerated human evolution and “made us in their image, after their likeness”. However, it’s still pure fiction, a licentia poetica.

Rafał: In my opinion, a belief in the Christian or whatever else god is just as reliable as the belief in aliens, or even less. Eventually, god was the “most popular” in the time when everyone thought that the Earth is flat. When we learned that above us there are other planetary systems, in which, as it turns out today, there are billions of planets similar to ours, then our horizons should definitely expand. I think it’s quite attractive vision.

Still about the concept: have you ever read some (pseudo)scientific literature about this theme, for example the books of Zecharia Sichtin?

Tomasz: To be honest, we had no contact with his work. But we used some Erich von Daniken stuff and read some articles in pseudoscientific, esoteric press, which in my opinion are based mostly on the theories of both of them. But our very first inspiration was “Prometheus”, a film by Ridley Scott.

The songs I prefer are “Newborn Sun” and “Imitation”… can you tell me something more about them?

Tomasz: You have chosen two the most distant tracks in some way. “Newborn Sun” is the oldest one and the most extensive in the same time. It was created many years ago and over the years has undergone a kind of evolution. “Imitation” was created shortly before recordings and appeared on the album in its initial form. For sure you can see how they differ from each other, which is a natural consequence of the evolution of our music.

Rafał: The most awesome thing about these two songs is that they both gracefully share the same atmosphere, although they were created, as Tomek said, in several years apart. Although “Newborn Sun” is a great song, I think that our work is evolving toward simpler solutions that are shown in “Imitation”.

What are the main influences in the sound? In my review I write that I hear in your music a touch of old Paradise Lost and of the British gothic/doom sound of the middle ’90… do you agree?

Tomasz: As for me, I could mention many inspirations, but the most important are bands like Opeth, Katatonia, Tool, Swallow the Sun, Riverside, Blindead and many performers who play a lot lighter and have nothing to do with metal. Each of us has his own inspirations, so we can pick and choose ideas and call our music diverse.

Rafał: We share similar taste in music with Tomek, but I listen more things like classic rock and stoner rock, especially the slower, low-tuned things played with a solid kick. As for Piotr, he’s an old fan of death and black metal, and our bassist Paweł listen that kinds of music which listens about 0,1% people on the whole world, and that means totally aberrant things.

What are your future plans now? Do you think we can ever see the band playing in Italy?

Tomasz: We’re planning to intensively promote our debut album, and of course we would like to play not only in Poland, but also in other European countries. For now we’re planning to go more to the east, but in the future we want to visit more countries in Europe and we hope that we’ll manage to play in Italy too!

I leave you as usual the end of the interview. Thank you for your time and see you soon!

Tomasz: Thank you too! We invite you to listen our stuff on http://defying.pl , where you can download our debut album “Nexus Artificial” in highest quality for free. Greetings from Poland!