HELENA IREN MICHAELSEN (Angel, Imperia), “so I tried to call for help from whatever higher powers above, but made the experience that none of that was responded” 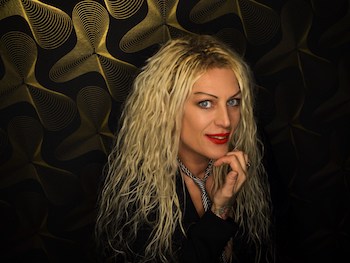 Angel is the solo project of Helena Iren Michaelsen. She was the singer of Trail Of Tears and Sahara Dust, the band that becomes Epica, and now is a member of Imperia. This year she released like Angel the second album and in fact it’s titled “A Woman’s Diary – Chapter II” (here’s reviewed). The album is personal, honest and true as a diary should be. (versione italiana)

MH: Hello and welcome Helena, thank you for this chance to talk with you. First of all congratulations for “A Woman’s Diary – Chapter II”. Fifteen years have passed from “A Woman’s Diary – Chapter I”, it’s a long time and I suppose today Helena is no longer the same.
HIM: Well, I tend to think that much of me still is the same, but off course with all changes and experiences life puts us through, we also change as a person, it’s just how it goes. I believe that the core of who I am, the values I believe in, the moral codes I follow, whatever you want to call it, none of that has changed with the years. But I’ve been going through a lot in the time between these two albums, and much of that also left traces upon me. I explain this more in detail later.

MH: Tell us about your writing process. How does it work? Do you create before the music or melodies and after the words?
HIM: That differs from song to song, sometimes it’s a phrase of the lyrics that comes first and gets stuck in my head, sometimes it’s a melody, it can be anything actually. I do not have a standard process I follow with every song. On the Chapter I album actually there was a lot of songs that were based on versions of those songs that I had recorded with only acoustic guitar and vocals. As well there is a few songs that I had originally written as a teenager already and that then made it onto the albums many years later. That is the case with “Silence” and “Streetchild” on the new album.

MH: I like the huge variety of styles in this new album. Symphonic, rock, metal, world music, pop are all consequential and different songs can stay all together. I think about songs like “Imprisoned”, “Do You Hear My Cry”, “Happy Birthday”, “My Desire”, “Angel Maria”, “Silence” etc.
HIM: All the lyrics are very personal, and I have had a very colourful life with a lot of ups and downs. The music is supposed to reflect that, and that’s why there is such a big variety of styles. Lyrically a song like let’s say “Imprisoned” could be impossibly further away in mood and topic from a song like for instance “Do You Hear My Cry”, so it’s just natural that there is completely different music going with it. With my solo project I do not feel committed to stay in one particular genre or anything like that, I am completely free with creating each single song the way I have in mind. I actually just follow my feeling, I don’t think much about how I want the song to sound like, it all comes and happens naturally. 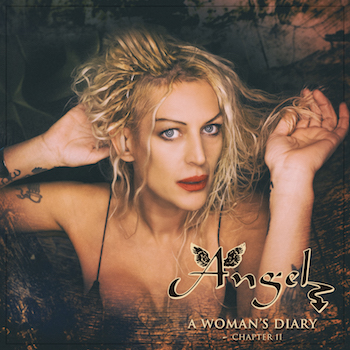 MH: Oliver Philipps collaborates with you in “A Woman’s Diary – Chapter II”. He’s the producer, but did he also work at the composition? Who wrote the music for your diary?
HIM: First of all, he’s not only my producer but actually my husband, so we’re living together. We worked together very closely on this album. The creation of a song would typically startfrom a basic idea that I have, be it a melody line, a part of the lyrics, whatever. And usually I also have a clear picture of the vibe I imagine around it, and this all I try to explain to Oliver. He will then try to work out an arrangement for the song that captures this idea, try around with different chord progressions around my melody lines, etc., also that doesn’t follow an exact receipt, so it may differ a bit from song to song. We have a very special artistic connection, so most of it happens without making too many words about it, it kind of just falls into place naturally.

MH: “I Don’t Believe” and “Silence” are two wonderful songs. They are not the only in your diary! Can you tell me something more about them?
HIM: Both songs are very personal to me. “Silence” is reflecting times in my life where I was all alone and having extremely hard and difficult times to get over with. It is about feeling that there is absolutly nobody there and noone you could talk to, and then you feel that silence is the only friend you have. The song is trying to capture the way I felt in those days. “I Don’t Believe” goes back to abuse experiences I made as a child, when I was feeling completely helpless in the situation I was in, so I tried to call for help from whatever higher powers above, but made the experience that none of that was responded.

MH: When I started working to these questions I knew nothing about all the things happened to you from 2014 till… today, I suppose… I coultn’d find information in italian webzines and I think not many journalists talked about your situation. I’m straightforwardly shocked for you. Would you please explain what happened in Froland?
HIM: After the first Angel album I got my daughter, moved to Norway and bought an old farmhouse. Than I took education for child and youthworker and special pedagogics. I worked as a teacher in
Asdal school in Arendal. I wanted to give my daughter a safe and good growing up living on this farm in the forest with dogs and horses in harmony with nature. But after a coupel of years it turned into everything else than that. In 2011 the commune decided to give their own family illegally building permission for two houses and a car road towards my propety although it was a nature protected area. Much of the building work was done unprofessionally and illegally, and the digging works and the explosives used (in Norway the ground is mostly rocks, so you typically have to use explosives in building work) damaged my drinking water supply and my sewage system. So my daughter and me, as well as our animals ended without water. From there I was forced to carry out a three year long lawsuit towards Froland commune and the people who had done the illigal work that created the damages because none of them wanted to take responsibility for what they had done. In the end I won those all, but I was not prepared for their kind of unhuman and terribel revenge for that. So since 2014 I have been for yet another 6 years in fight with a corrupt system to get my daughter (Angel maria, ndr) out of it and back home.This has taken most of my time. And while I tried help her I got politically imprisoned in 5 prisons all over Norway without having done anything else but trying ask help and help my daughter out of her terrible situation. In prison I was abused, hungered, exposed to the most terrible things you can actually imagine. Such as beeing locked into a prison cell covered with urine and sexually assaulted by 5 officially working men, some of those being police officers. So without getting carried away, I will eventually write a book that assembles the story of my album “A Woman’s Diary – Chapter II”.

MH: You’re preparing a new solo album like Angel. The last song you posted in YouTube, “Miss My Family”, recorded in norwegian, is it an example of this next album?
HIM: That song you heard on YouTube is not going to be on any of the albums, it’s just kind of an extra. I already finished another album that is going to be released in December. It is called “A Woman’s Diary – The Hidden Chapter” and is mostly made of only piano and vocals. It contains a couple of original songs, but mostly cover versions of songs I like and feel particularily connected with for different reasons. So be prepared for a very unexpected collection of songs covering a range from Motörhead to musical. Besides that we’re already working on some songs for the Chapter III album, which I am planning to bring out already next year. It took 15 years from Chapter I to Chapter II, but for the future my plan is to have one in every year.

MH: Some news about Imperia. The last album (here’s reviewed) was really appreciated and now you and the guys are preparing a new album with a new drummer, Merijn Mol (Satyrian, The Dreamside, ex Danse Macabre).
The album is already finished mixed and mastered, so it is ready for release in early 2021! Steve unfortunately could no longer be part of the band due to private reasons, but with Merijn we found a great replacement. He’s an old friend of guitarist/composer Jan Yrlund, they’ve been in several bands together in the past. He helped us out as a live drummer on the shows we had last year in October, and since that worked great and the chemistry between us all was great from the start, it was just the natural thing to do that we asked him if he wanted to join the band permanently.

MH: What would you like to say to our readers?
HIM: First I would want to say Thank You for all the support over the years, and I do have some great memories of time I spent in Italy. I always felt very welcome in Italy and people were very warm and friendly towards me. So I just wish that also this new album will be appreciated and embraced by the Italian audience.