HIGH PRIEST OF SATURN, “any other singer wouldn’t understand how to convey what she wants to convey because they haven’t felt it” 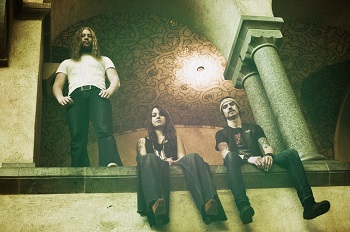 Bands that come to a debut are always a surprise. When I review these bands, I always hope to find something new, something I never had before. Something that really triggers me. With this band from  Trondheim, I had what I wanted. Starting from the moniker itself, with their music I was dragged into a wonderful atmosphere. Once I played the album I was buried in a gloomy fog, full of doom sound wisely turned into music with a clear ’60s and ’70s influence. Then when I heard the voice of the singer, I was left breathless. Couldn’t resist asking Andreas (Guitars and Drums), something to get to know this act in a deeper way. (versione italiana)

Hello Andreas! Thanks for the interview. I love your last album. Those vintage sounds drive me mad. Here some questions for you. Well, you’re a new band, and just released your debut. Tell me something about you, how you formed, what’s in your mind
First of all, thank you for the compliments on our album! We are from the town of Trondheim, in the middle of Norway. Merethe had begun writing songs in the beginning of 2011, she showed the riffs to me and told me about the concept she envisioned, and the band was formed. Our minds are preoccupied with all the different styles of music we like and how we can combine them into something new on our next album.

This album is somehow spiritual. Tell me something about how you managed to record this warm, yet scary, sound.
The warmness of the sound comes from mostly using analogue equipment. Basically we had nothing between the guitars and the amps and relied on sheer volume. The album was also mixed on all analogue equipment, which contributed to it sounding the way it does.

The voice of Merethe is eerie, sensual, deep and mystic all at the same time. In one word fantastic. Not many bands decide to have a frontgirl, and surely not with this unusual voice.
It wasn’t that much of a decision, Merethe wrote most of the material and the lyrics and wanted to sing her own songs. It’s just part of the urge to perform. She sings in her own voice, and that makes it more personal. The characteristics you describe are a consequence of this, any other singer wouldn’t understand how to convey what she wants to convey because they haven’t felt it.

The length of the tracks is impressive. Yet they keep you focused, they don’t get lost in the length, they rather attract in a magnetic way. Was it planned or you simply created music this way?
It’s just the way the songs naturally develop, when we arrange songs we just sort of know how things should be put together and when a song doesn’t need more parts. You feel it more than you analyse why you know a song should be the way it is.

What is the typical process, if any, that leads to the creation of a High Priest Of Saturn song?
Merethe writes the riffs  and then Merethe and I arrange the songs in the rehearsal space, record basic rehearsal tapes and then Merethe comes up with vocal parts on her own. After that we let the songs evolve through rehearsals with Martin. We let Ole do whatever he sees fit, he doesn’t really write organ parts, he just plays off us. We also have some sections where we just jam, I guess you can tell the whole ending of ‘On Mayda Insula’ is improvised.

Can you tell me something about the lyrics?
The lyrics deal with state of minds, conveying the constant and the relentless. The album art offers some clues as to what the album is ultimately about.

The Organ. What a beautiful instrument. It gives so much to the music. Say whatever you want about this instrument and the way you use it in your music.
We like how the organ is used in Deep Purple, The Doors and Pink Floyd, although they all represent different ways to use it, savage, playful and contemplative. We wanted to have a bit of everything, and Ole Kristian who played the organ on the album did a fantastic job at delivering a great mix of the styles we wanted. He’s a real pro, and improvised the whole thing, swinging seamlessly from the playful to the sinister.

I’d like to know how you came up with your moniker. It surely feels so 70s, and I admit, I love it. It has a magic effect on me.
We wanted something related to Saturn, and also wanted something that would fit the mysterious and augury-like atmosphere we were creating. The High Priest part actually came from some lyrics I wrote for Resonaut that were ultimately rejected.

Svart Records. Personally I love almost all they releases. Tell me about how does it feel to work with such a label among other bands playing some very special and specific music.
Svart has been fantastic, nothing but professional and easy going, we are really happy that they wanted to release our album and we feel privileged to be on such a great label.

Please tell me about your live plans. Also if  you think about visiting Italy.
We are playing this years Pstereo festival in Trondheim, which is really great for us since it’s quite a large festival with mostly a ‘non-metal’ audience which gives us a chance to reach out to people who otherwise wouldn’t have seen us. Also, we’re playing the brand new and amazing Høstsabbat-festival. We would love to play in Italy, we’ve been there on vacation and it’s a beautiful country.  Unfortunately we don’t have the freedom to do a lot of touring these days.

OK, thanks a lot for this interview. Close it with a message to the readers of METALHEAD.IT.
Listen to Spectral Haze and Purple Hill Witch.