JERRY BLOOM, “show me a musician who has been idolised by so many who doesn’t have a huge ego” 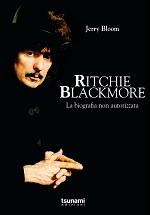 We’re talking about 381 “not authorized” pages that Jerry Bloom, long time music periodist and in charge of More Than Black Purple and Autumn Leaves -Mostly Autumn official magazine- wrote to tell about one of the great six strings genius. Richie Blackmore signs the history of rock with Deep Purple. His fame, built up across the years thanks to an innovative playing technique, drags along the fact he is a very strange individual. “Black Knight: Ritchie Blackmore” tells all about this overwhelming story. (versione italiana)

Hi Jerry, thanks a lot for this interview and for me has been a pleasure to read your book.
You’re welcome.

To me, Blackmore is THE guitar player. The one who translated blues into rock, took Hendrix style and evolved. Simply a prophet.
As Monty Python said in the Life Of Brian, ‘he’s not the messiah, he’s just a very naughty boy’.

You met him in real. I’d like to know if, with the time passing by, meeting him made you understanding Blackmore in a wider way?
I have met Ritchie many times, sometimes spending several hours in his company on each occasion.  Perhaps Ian Gillan is right when he says no one really understands Ritchie, although I think I have a good handle on him and have seen both his good and bad sides.

Have you had any problem in writing down the book? Have you any news from Blackmore and his opinion about your book?
The main problem with writing the book was insufficient time.  I only had nine months but would have preferred two years.  I would be surprised if Ritchie has read the book as I don’t think he has a great deal of interest in reading about himself, although I believe Candice might well have read it.  She has made some comments about me not speaking to the people within their “inner circle”, and therefore not getting the truth.  That said I spoke to many who were involved in Ritchie’s “inner circle” in previous decades, many before she was born!  So whilst she might be correct with regard to the period since Blackmore’s Night started, I would say quite the opposite is the case for the rest of his career.  That said I spoke to people who they banished from their “inner circle” and I was witness to many things that went on in Blackmore’s Night although some of them I did not include in the book!

I always asked myself, reading a biography, what is the best way to work on it, and how you plan your activity to find out, and organize, all the information about the story of somebody.  Early life, family, early bands, places he visited. You wrote tales about the ’50s and ’60s, and back then Blackmore wasn’t the man we all know. How did you work to build up these facts and events?
The earliest part of the book is the bit that I am most proud of.  I decided when I started working on it to focus on the early years first. Partly because I knew they would be the most difficult and partly because I would need to contact the oldest people, and hopefully do that before they died!  Sadly some of those who were very helpful have since died, such as Tony Dangerfield and Neil Christian.  The latter kept in contact right up to his death and regularly phoned me.  A sad loss.  The first part of the book is also the bit I spent the most time researching.  As you say, very little had been previously documented about his life before Deep Purple.  I also have to say that I don’t think it would have been possible to do it in the time frame that I did without the Internet.  It was through that, that I found his first ever girlfriend, and some of his old band mates, such as Ricky Munro from the very short-lived band Mandrake Root.  I did already know some people who were involved in his early career such as the drummer Mick Underwood, and Purple’s Nick Simper, who had seen Ritchie years before they got together.  People like that also put me in contact with many other people such as Mike Dee who was the leader in Ritchie’s first professional band. I also spent several days at the British Library in London looking through the old music papers of the early sixties, which were invaluable.  It was also very exciting to open one of those up from 1963 and see in the centre pages a photo or Ritchie with Jerry Lee Lewis.  Of course Blackmore was a virtual unknown then, but the people he played with such as Lewis and Gene Vincent were big stars so there was a lot of coverage.

Who is Ritchie Blackmore? A great guitar player? An egocentric and grumpy artist? A complex personality? You mentioned his determination.
In my view, and remember it is only my personal opinion; Ritchie Blackmore is an extremely talented musician, and a very flawed individual with regards to the way he deals with other people.  I think because he is so good at what he does, and has worked so hard to achieve it, I don’t think he finds it easy to surround himself with people who are not up to his standard.  He is definitely determined, but with that comes selfishness, which I think is his worst quality.  But he can be generous and he is also a very humorous man.  As for the ego, show me a musician who has been idolised by so many who doesn’t have a huge ego.  That said the skill is to keep that in check, and not to take yourself too seriously.  I think that is also where the complexity can come in because on one hand people in his world are constantly surrounded for politeness, from people who constantly praise what you do and tell you how great you are, whereas there is often a deep rooted insecurity and worry that other people will immerge who are better and more successful.  Many people in the world of creative art suffer from that and Ritchie is no exception.

Is there an anecdote  about Ritchie do you believe better describes him? The most meaningful one, making him unique.
I don’t think so.  Every human being is unique.

Thanks for this interview. Please say something to the Italian readers, maybe with few tips about how to approach the book.
I hope the Italian fans, of whom I know there are many, will enjoy the book.  When I set out to write it, it was not my intention to put forward my own opinions but to document Ritchie’s life and career from a combination of the interviews with himself, and the 50 that I did with the various people who have been a part of his life in some form or other.  I did not want to portray him as good or bad but to hopefully finish with an end product that allows the reader to form their own conclusion having read all the different stories that unfolded. That said I think the key to some of his character can be better understood by reading about his time spent working with Gene Vincent!  All will be revealed once you read it!

(Alberto Vitale)
(Thanks to Luca Zakk for his work)