MORMÂNT DE SNAGOV, “These are all obviously lies that are supposed to keep people happy and unaware about the fact that when you die, it’s the end of you.” 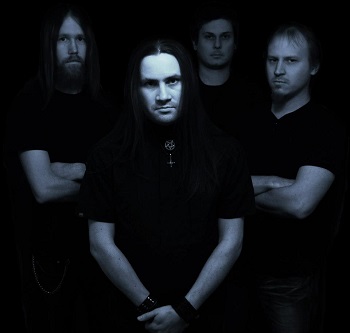 A very interesting act these Finnish black metallers.  Actually a band that delivers a great and wise blend of black and death mixed in a uncommon way. Denial of religion and its stupidity is their core topic, a topic that is developed with intelligence, generating very deep lyrics and songs.  I had the chance to talk to Domnul Cadavru, guitars and lead vocals, and he revealed me some interesting details, explaining all the energy behind this very good band, and this great album that we had to wait for some five years. (versione italiana)

Hello! Thanks for the interview. Congrats for your new effort, it’s so violently sick. I got few questions for you. You arrived to the second full length. It’s somehow the key step. There are many bands that disappear after the first release. Can you tell me something about how this “Derisive Philosophy” has been created? Again on a minimalistic recording studio, like the previous album?
You are absolutely right. We feel exactly the same. This is an important step on our career in these times where so called “bed room black metal” bands are very common. As a matter of fact “Derisive Philosophy” was recorded about two years ago. Some songs, for example “Divine Dismemberment”, were written back in 2009. After the recordings there was a delay because we concentrated on playing some live shows and there were also few things in my personal life that required my attention. Anyway these things don’t matter anymore. The most important thing is that we now have this album released. Just as we did on our first album, we recorded this on our rehearsal place and some parts in the home of our studio wizard V.K. This time V.K. had some new equipment and he did absolutely amazing work with the production and mixing etc.

What about the evolution between first and second album? Where do you want to lead your music? I noticed some massive death metal influence on “Derisive Philosophy”

Our first album is very pure passion for black metal. I have played in several bands since the mid 90’s and for a long time I have wanted to write my own music, especially black metal. So “Rise From The Void” is kind of an eruption that includes all those ideas I kept inside for several years. The composing and the recording happened all very quickly. We had a clear aim and we headed for it very determinedly. “Derisive Philosophy” is something that we arranged more carefully and although most of the riffs and songs are made by me, we put the songs together more as a band. At that time I had some kind of death metal listening period going on, and our guitarist F. Domhnall is very much into death metal, so the death influences come from there. We are not intentionally heading towards “blackened death metal” or such crossover stuff. Mormânt De Snagov is, and will be, a black metal band. You can find influences of all metal sub genres in our music and even some influences completely from outside of metal. There is also a major difference in production and sound between these two albums. “Derisive Philosophy” is much more polished which suits the songs pretty well, I think. For the future I can reveal that we have three new songs ready. We don’t know how or when they will be released, but I think that the sound is going to be very raw this time. There will also be more variety in songs. Two of them are very straight forward black metal and one is a progressive seven minute monster. One thing is very certain: Mormânt De Snagov will never stick with one sound or style. We will always keep moving on.

You’re from Turku, Finland. Your country is famous for a lot of extreme music bands, but not properly for a straight forward black metal. How do you fit in the finnish scene, how is the feedback from public in your country?
Mormânt De Snagov doesn’t fit very well to the local “scene”. Some think that we are too ordinary and some think we are too weird. Anyway it doesn’t matter to us. At the moment most of our FB group members are from outside Finland. Of course we have a lot of loyal friends who come to our shows and buy our releases. Those people are very important to us, but apart from that we don’t’ really care if we are well known in Finland or not. There is a small underground scene in Finland, and many people know each other, which of course mean that the same fellows play in several different black metal / extreme metal bands. None of us is involved in any other “big” metal bands. Many of us have played (or are still playing) in several unknown and moderately known bands, but we keep it all clearly separated. Mormânt De Snagov will go on with Mormânt De Snagov’s achievements without “having a free ride” by taking advantage from our previous / other bands.

This album is the first on well known Pest Records. Can you tell me something about how you managed to be signed on this label?
It happened by an accident. I was just about to write several letters to labels around the world and tell about our will to get signed. Just before sending the letters (I never sent them) I found Pest Records website and contacted them by email. They answered rather quickly, and we found out that we have a common aim. When sending emails back and forth with Pest Records it felt that they have the same kind of attitude about underground metal than we do. It’s a nice coincidence also that Pest Records happens to be Romanian (editor note: the moniker of the band is actually in romanian language). It’s very important to us that our label is in line with our ideology and views. Pest Records seems to be perfect!

I noticed that you’re spreading in South America. That’s great, there’s a wide potential fan base down there. Did you get any feedback so far?
There aren’t any reviews from there yet as far as I know. We have received some feedback from individuals and the feedback has been positive. It’s very nice to know that there’s a huge number of extreme metallists out there. I respect those people because in some countries in South America it might not be very easy to support such an extreme view of life. In Finland, and many other western countries, you can basically do or say anything without getting into trouble. It’s not like that everywhere on this planet. These individuals out there do really deserve my respect.

With the new album you decided to take off the masks, giving a new look to the band, and actually separating from the typical black metal trend. How did you come to this decision?
Last winter we had a small drinking party on our rehearsal house and we realized that in 2013 Mormânt De Snagov will be five years old. We felt like we would like to do something special. After a brief conversation we came up with the idea to wipe the masks away. When you listen to “Derisive Philosophy” you realize why. It’s not such music that represents brutal blood spilling, fire and corpsepaints. It’s kind of more elegant musical expression, so to speak. Of course there are many fast bursts of hate on that album, but not that kind of rawness that was on our first album. The blasphemy, dark ideologies and hate is more subtle on our new album. Taking off the masks felt like a good idea at that time and I still think it is. You never know where we go from here. I guess our future songs will determine if we get back to wearing masks or not.

Can you tell me about the lyrics on your new album, and how they evolved from previous full length? Also, how did you named it like this, actually the title is fantastic!
Thanks, I must admit that I like the title of the album too. Our lyrics in the first album were not as profound as on this album. We concentrated more in blasphemy disguised in horror stories or just simply blasphemy and our ideology. In “Derisive Philosophy” the lyrics are about death, the blindness of religious people, falseness of the religions and about the means religions use to keep people imprisoned in their system. There are two key songs on the album (“End Of My Thoughts” and “Detrimental Edict”) that deals with death, the fear of death and the infinity of death. In many religions they have different kind of explanations for death. Some say it’s a gateway to a life in heaven and some say it’s just something that needs to happen so that one can be born again in another life. These are all obviously lies that are supposed to keep people happy and unaware about the fact that when you die, it’s the end of you. Period! Some people find the truth too hard to handle and so they tend to believe in god, paradise, heaven or whatever. The song “The End Of My Thoughts” tells a story of a dying person who is absolutely okay with the idea that he or she will die and that’s will be end. Detrimental Edict instead compares death to an ocean, and describes the feeling of drowning into a deep, cold endless sea. The title of the album comes from these songs. It’s very much against religions and mainstream ideologies to think that death is really the end. It somewhat pulls the carpet off under their feet. If people stop to believe in afterlife, they have one reason less to believe in any god. Thus religions keep telling these lies to people. It’s one of their tricks to keep people into religions. Our view is that there is no afterlife: it’s our derisive philosophy against religions.

What about touring? There are a lot of event, especially during summer (in Europe we already had Hellfest, Carpathian Alliance, Wacken). What are your plans to spread your music around? Will you go to South America? Any plan to visit Italy?
We are very much into playing live. It’s one of the reasons we play in a band afterall. We don’t have any booking / management agency and we are not very talented organizers ourselves. We have currently one planned show in Finland this autumn and we’re working to get some more live shows confirmed. We are willing to play anywhere we are invited to, as long as it’s not completely economical suicide for us. So if someone wants to book us to South America or Italy, we are ready to go as long as the terms are reasonable.

OK, thanks for your time, please close this interview how you prefer, telling something to the readers of METALHEAD.IT.
Thanks for your interest in Mormânt De Snagov. There is a huge amount of underground metal bands out there and it’s very hard to get the name of the band known to even a small group of people. We will keep doing our dark art even if there was absolutely no one interested in us. This is our lifestyle and it can’t be taken away from us. With this said we are still very happy about each and every fan out there. Keep on buying physical releases, it means a lot to the bands and labels releasing them. If you listen to Mormânt De Snagov and decide it’s not your music, then spend your money on some other honest metal band. Thanks!