RAGNAROK (UK), “ ‘Þridda’ should have been the 3rd album, but as you say, it never saw the light of day” 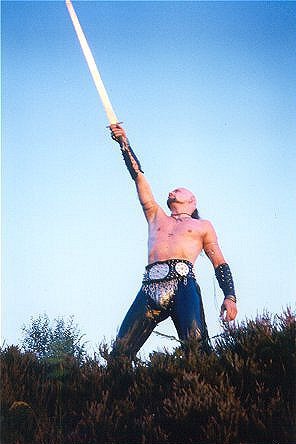 A real stroke of luck, made possibile by the new technologies! I was searching in the web for “Of Ages”, a posthomous collection of demos and rarities of the english band Ragnarok, pioneers of the folk/black scene… and I accidentally got in touch with Deörþ, mastermind of this from twenty years disbanded group. He accepted to have an interview with us and so here we are: I think that our chat fills a certain gap of information in internet about this seminal band. Enjoy reading (In italiano QUI)!

MH:Hi, and thank you so much for this interview! So, circa 20 years after the disbanding of Ragnarok, how is your everyday life? Are you still involved someway in the music business?
D:I’ve had nothing to do with music for a long long time, other than listening to it of course – favourite bands at the moment are probably Theatres des Vampires and Blutengel. TBH, with the daily grind don’t have a great deal of spare time, and any free time I do get is spent with the cars – I run the local section of an Alfa Romeo group so most of the metal I play with these days comes on 4 wheels lol

MH:Would you like to briefly recall the history of the band? Is it true, as the Metal Archives suggests, that Ragnarok disbanded after parts of your third album-to-be went lost?
D:Band started out back in 1987 under the name ‘Nasty’, with guitarist Paul Trotter, more recently with Holosade, and now Armortura. We changed the name to Ragnarok in 1988 when Morgoth joined on guitar and Cernunnos on drums. Gigged around the local area for a few years before releasing the first demo, ‘Ragnarok’ in 1991, and our 2nd one, ‘Voluspa’ later the same year. Moon replaced Morgoth in 1992, and we used a drum machine and session guitarist to record the 3rd demo, ‘Beloved of the Raven God’ in 1995. Stenfält joined on guitar along with Senrith on keyboard in 1996, and Moon was replaced by Ashrath just before we signed up with Neat Metal Records in 1997. “To Mend the Oaken Heart” came out the same year, and “Domgeorn” 2 years later. “Þridda” should have been the 3rd album, but as you say, it never saw the light of day – we’d laid down all the drum tracks, bass, keyboards and some guide guitar lines, but it never got completed. Lost in the ether…. a few years back I was approached by Aurora Australis records who originally wanted to re-release the first 2 CDs, but we already had a full album already to go of the old demo and unreleased material, so at least that one finally came out – always good to have a listen to the old stuff and see how it progressed.

MH:Still about “Þridda”: is it true that nothing remains of the songs you were composing at the time?
D:As I said, most of the basic parts had been put down. The album was to be 3 parts (hence the title – Þridda is Old English for Third), and each track was an epic 25 minutes long with huge orchestral parts and various traditional instruments – unfortunately, all that was lost when the Neat Metal label was sold. Really not sure what happened to it, and I know the guys at Impulse Studios did a search, but the master tapes were nowhere to be found…. I did spend a fair while trying to track them down, but sadly to no avail….. 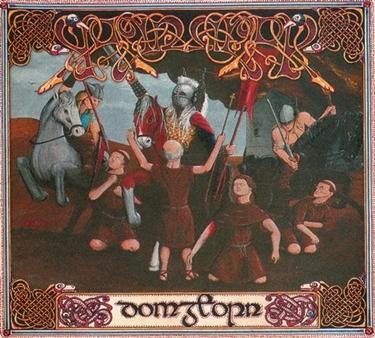 MH:MH:I suppose that the warrior featured on your covers is the Raven God… is it correct? What can you tell me about him and his ‘Beloved’, who, I argue, appears on the cover of your last demo and on the back of “Domgeorn”?
D:The Raven God is Woden/Odin in Germanic mythology. His ‘Beloved’ is his 3rd wife, Eorth – Earth, mother of þunor/Thor.

MH:Are you the author of the booklets, of your logo and even of the characters’ type in which the texts are written, am I right? Do you think that those elements were important to carry on your message and your music?
D:Ha ha, Yes, I used to have much more time on my hands lol. I was a bit disappointed by the way the booklet for “Oaken Heart” came out, so when we were doing “Domgeorn” I decided to do all the texts by hand – not quite the Lindisfarne Gospels, but I think it certainly gives it a bit of a primitive artistry which goes well with the music…. maybe not so easy to read though lol!

MH:Let us speak now of the titles of your album: what does “Domgeorn” means and what is the message that a title such “To mend the oaken Heart” carries?
D:“Domgeorn” means “eager for glory” – and is a central part of the Anglo Saxon warrior psyche, especially in the poems like Beowulf. “To Mend the Oaken Heart” – to be honest I can’t even remember where that came from – the “Oaken Heart” is the heart of Nature I guess – a more natural way of being.

MH:Some of the lyrics of “Domgeorn” are written, if I am not wrong, in Old English language… how did you came to the idea to write and sing texts in this way?
D:It was something I always had an interest in – who we are, where we came from. It’s a period in English history which is often overlooked, sandwiched between the Roman and Viking times, but it’s actually the period which accounts for the majority of our language and culture. Learning the language was really interesting and gives such a deeper insight into many of the odd little quirks of English. Writing lyrics in OE was also a way to separate us a bit from all the Viking/ Norse bands around at the time.

MH:My favourite song in your discography is “þonne Waeron We Haeleð”… it is quite disappointing for me to ignore even the sense of the title! Could you please explain the nature of the song?
D:“Then (or When) we were heroes” – I guess like many of the songs, looking back at a glorious fantastical past – the tales of epic poems and myths, and the ideologies of a warrior elite. Blah blah blah – you get the idea lol.

MH:Do you think that Ragnarok leaved a heritage in the actual folk/black/Viking scene? Do you think that you got less than you deserved?
D:I actually listened back to “Oaken Heart” just the other day, and I was thinking “hey, we were pretty good…..” and then I listened to other bits thought, “nah, some of that was pretty bad, ha ha!” Did we have an influence? Yes, I think we did – every now and then I see something or hear something and think, that clearly has some of us in it, and it’s always great to see a mention now and again, or see people stick something up on YouTube. I don’t think we got less than we deserved – we had a good time, and it’s great to look back at it again. Only real regret is that the Þridda album never got finished – I always thought one day I’d maybe try and get it done again – all the music is written down, cover artwork was started…. but it’s highly unlikely now – doubt my voice would cope lol!

MH:I leave you the end of the interview if you have some message for the public or some declaration to the world… thank you very much for your time, and see you soon!
D:Message to the world ha ha – follow your dreams. You only live once, so make the best of it. Thanks for the interview – it’s been great to relive some of the old memories. Cheers! 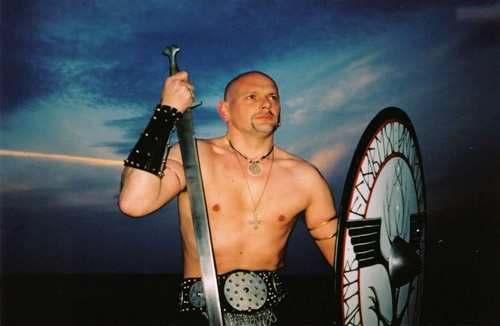