SKÁLD, “Norse mythology is the very core of our inspiration” 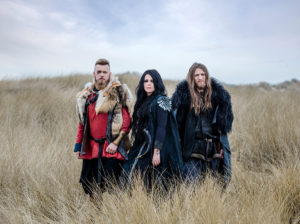 For the publication of “Viking Chants” we have contacted the French band SKÁLD: this is the result of the long chat with the three band’s singers. Enjoy reading!

Hi guys, thank you for this interview! Would you like to introduce the band?

Mattjö: Hi! SKÁLD is a fellowship of modern artists inspired by ancient Nordic Chants, Mythology and Music. We are bound by the same passion and the will to connect people with the old Norse Magic, Poetry and Spirit through our songs.

Pierrick: Hi Renato, our pleasure! We sing in old norse, which was the language spoken by the Vikings. We use ancient instruments from the middle ages such as lyres, talharpa, jouhikko, shamanic drums, horns and many more… Our music is inspired by the myths, the poetry and the spirituality of the men from the north.

Justine: Hello Renato, I am Justine the female singer of SKÁLD. SKÁLD is a unique project, our will is to spread the Nordic myths through our chants.

Do you think we can define as ‘metal’, perhaps ‘folk metal’, the SKÁLD music? Or do you think that your sound is more articulated and with more influences?

Pierrick: I really don’t think so… I can’t see how SKÁLD can be related to anything ‘metal’, for we don’t use any guitars, any distortion, any modern drums… Don’t get me wrong, we all love metal music in SKÁLD, but let’s be honest: our music is based on experimental works. We have collected a lot of ancient instruments from the north, we’ve made a lot of research about traditional Scandinavian music and folklore… Our sound has nothing to do with metal music, even if metalheads share the same interest with those topics. I would say SKÁLD play Nordic Epic Music, or something like that.

Justine: SKÁLD is not an ordinary project, neither a metal band. We are a vocal group above all. We master different techniques, both lyrical and guttural,  our music is played with mainly medieval instruments, very far from the metal universe.

Mattjö: We all are in SKÁLD Metal fans, but to be honest, our music engraves itself through a pretty different process compared to usual metal music.

How much is Norse mythology important in your music? Is it a source of inspiration or a real ‘way of life’?

Mattjö: It is a real philosophy and source of inspiration. To me, it is the same process than our music. An modern interpretation of an ancient culture and spirituality. I would quote “the Edda”, The sagas or “Hávamál” for example. But they are so many other sources.

Pierrick: Norse mythology is the very core of our inspiration. SKÁLD, in old norse, means poet. The role of a skald was to perform the art of poetry, which was highly respected in those times. There were no books: all the knowledge, all the stories were transmitted orally, which gave the skald a powerful status. Then in the XIIIth century in Iceland, a book called ‘The Edda’ was written, collecting all the myths of the Nordic gods and heroes. This book is an amazing source of inspiration, both musically and spiritually. The more you read and learn, the less you think you know. Those myths offer a deep reflection on destiny, life and death, our relation with Nature. I would say it’s a real ‘way of life’.

Justine: Above all, I am passionate about World Music, I love eastern traditional music from the east. I am a nature addict and I love medieval history. In my opinion the spirituality linked to the nordic topic is not a trend, it is a way of life, something you can practice on a daily basis. What inspires me personally through norse mythology is the connection to magic and nature.

Again about Norse mythology: what do you think about the misuses of it, e.g. for Nazi ideology?

Pierrick: It upsets me a lot, so to speak. The Vikings were explorers, traders, they were curious to discover new lands, new people. They were able to settle down in any part of the world, adapting themselves to the culture of the inhabitants of the land.  Of course, they were living during extremely violent times, but they were no worse than any others people from that period. Their mythology never mentioned any racist content, so I can’t stand to see how some perverted minds can use this culture to feed their stupid ideas.

Mattjö: I would say that it is a real misunderstanding of the Norse values. From what we know, that kind of uses was just non-sense at that time and it should remain the same nowadays.

Justine: Cultural appropriation for negative purposes in all case is a sad thing. Our message is a message of peace, a connection to ancestral knowledge. The Viking culture, like many others, has suffered enough from these movements and radical communities, today we want to give a positive image far from any negative cultural recovery.

Let us speak now about your debut “Viking Chants”. What can you tell us about writing process, recording etc.?

Pierrick: The story begins one year ago, when I met the producer Christophe Voisin-Boisvinet in a festival. He’s a famous and well respected guy in the folk/medieval music scene, and he was already thinking of creating a band like SKÁLD, and so was I since many years. We kept in touch until we met Justine and Mattjö. The four of us locked ourselves in a studio, and began to work like maniacs. We read a lot, did a lot of translation of the ‘Edda’ and ‘sagas’. We had to chose the texts, to find the good modes and sounds for our chants. Lots of awesome musicians came to help us recording what we had in mind, it was a long and rich process.

Mattjö: We all wanted to work on such project, but also all wanted to meet the proper fellows to do so. Such chants and music must be shared with talented, sincere and passionate people. Christophe (the main composer) met Pierrick on a Fest and they shared pretty fast their interest for all the Viking Culture and Norse Mythology. As musicians, they felt immediately exited to the idea to work together! Justine has been introduced by Pierrick and fits perfectly! I’ve met Christophe in a Studio in Paris. 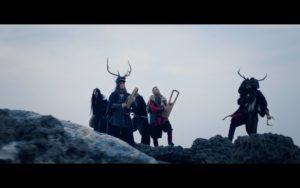 I would like to have some more information about the two songs I more appreciated: “Gleipnir” and “Krákumál”.

Pierrick: “Krákumál” is a song I wrote, inspired by the skaldic poem of the same name. The lyrics tell the thoughts of Ragnar Lodbrok (maybe now the most famous Viking in the world) when he dies. I sing it alone, with a Swedish fiddle, it is a very solemn song. It deals with fate, life, death and ancestry.

Justine: Gleipnir is a chant about the bond that keeps the Fenrir Wolf attached. A bond stronger than any chain despite its appearance, created from supernatural ingredients like for example the sound of a cat’s walk, the beard of a woman or the roots of a mountain.

Mattjö: Gleipnir is a very interesting song. It is about the unseen, magic, courage and trust. Krákumál deals with the last thoughts of Ragnar Lodbrok just before he died. It’s all a very deep and inspired song.

What do you think about the bands ERA and WARDRUNA, which both in my opinion are, in a very different manner, somehow near to your sound?

Mattjö: I really love Wardruna since the very beginning when we were still few to know it. Einar Selvik is like a pioneer to me and gave exactly the spirit and the inspiration I was expecting for a long time. I think that ERA and SKÁLD, in a way, intend the same in the process. I mean, a modern interpretation of ancient spiritual chants.

Pierrick: I am a hudge fan of Einar Selvik’s work. He is a pioneer, I respect him a lot. I love the norvegian music scene, from Bukkene Bruse to Gorgoroth, since my teenage years.

Justine: My parents rocked me with the music of Era, so it remembers my youth when I hear it. Era’s universe is medieval, dreamlike, spiritual and mystical. I love Wardruna, I am fascinated by their recording methods and their meditative atmospheres. They’re for me THE band that has allowed the scene to expand to a wider audience. Their appearance in the Vikings series helped a lot as well.

And what is your opinion about this ‘new wave’ of interest in Vikings, as showed from tv series, films, and music?

Pierrick: Being a Viking nerd since my early years, I was waiting for this to happen since too long. It’s good to be able to talk and crush the misconception most people have had about this people and that period. There’s a lot to learn from ancient times, from the myths and the past. This modern world we leave in is not healthy, and we need to learn from our old customs to reconnect with the rural side of life. With Nature. If that could be the new trend, it’s fine with me.

Justine: I think it’s great, everyone is able take a closer look at this culture, interpret it in their own way. The scene is growing and we are proud to be part of it!

Mattjö: I’m quite happy not to feel alone anymore haha! I’m in this poetry, culture and philosophy since I’m a kid. People thought I was a little weird sometimes. It is also often so when you do reenactment. Not anymore. Even if the series and the movies are not as sharp as they could on historical facts, details, costumes… It is pretty awesome to see the interest of people for the Norse culture.

Is it easy for you to perform live? Have you planned a tour for the next months?

Pierrick: To perform live is never easy, especially concerning our music. The challenge is to deliver on stage what took us months to record. We are currently working on that, as our first show will occur in Paris in a month. We will tour firstly in France until the summer festivals. Hellfest has been announced, more will be soon !

Mattjö: It is never easy but we work very hard to share the most powerful epic and Nordic journey on stage. We will play lots of gig this year!

Justine: We are working hard on SKÁLD’s live, it’s not easy to create a show, but we are ready for it.

I leave you the end of the interview. Thank you for your time and see you soon!

Pierrick: þǫkk Metalhead ! þǫkk to all the Italian followers of SKÁLD ! You know who you are, we salute you !