UNDAWN, “what it would be if everything we have right now was gone, and we had to build it up from zero” 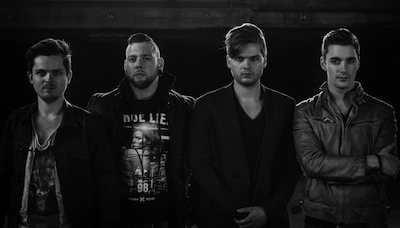 Interview to Michiel Brinkhuis of Undawn (he is the second from the right, ndr).

A little curiosity. Into the band there are even three Brinkhuis!: you, Thijs and Tom. Are you related?
Yes we are! Tom and me are brothers. Thijs is our cousin. We also wrote a song about it because our bond is so special. You can check it out on our latest album “Justice is…”. It’s called “A Bond of Brothers”!

I personally defined your new album “Justice Is …” as something that is more ‘metal’ that ‘core’: do you agree? This is basically also the opinion of the European press.
What we actually do is make a mixture between core and metal. This is because we love both genres. We like the melodic side of metal, and we like the more typical core sound. We combined them to make a very dynamic album. You can say it’s a metal album with core influences. We call it melodic metalcore, because it is a mixture between those to. It’s arguable. To be honest, we don’t want to spend hours on explaining what genre it is exactly. We care more about the message in our music, and the way we bring it live!

Has “Justice Is …” a different sound than the one there used to be in the past? What’s new in this album and this way you play today?
“Justice is…” is more melodic than our first album “Jumpers”. We also added more vocals and played a lot with different rhythms and leads to make everything more dynamic and easier to listen to. We also have a new member, Leon Kloosterman, who is an amazing vocalist and guitar player. He really nails the guitar solo on the album and during our live shows. We are very happy to have him in our band.

Into the lyrics I found out several interesting sides related to the theme of the album, but in my opinion they are not very direct. Why is justice the central theme of this album? What brought you to work on it?
We wanted to make people think about the question what justice is. About justice in general as it is right now, but also what it would be if everything we have right now was gone, and we had to build it up from zero. So just ask the question to yourself, without the pressure of everything around you, your education, or the way you’re raised. Would you still think some things are justified as they are right now? For example, the social differences between rich and poor, the big bonuses for bankers which caused the financial crisis. It’s all ‘legal’, but isn’t “legal” just a word that we humans made up? Legal is a word that’s been conceived by the government and people around you. “Justice is…” only gives insights, and it makes you think about social troubles we have nowadays. That’s why the text is more contemplative than direct.

How is the cover image related to the lyrics?
There are two concepts in our album cover. On front you see a girl. Inside this girl you see a lot of rich elements like money, gold, and big buildings. On the back you see poor people, misery, and you see grieve. It’s about contrasts. Sometimes we can’t see that the things we do in our ‘rich lives’ here are causing loads of trouble elsewhere. You only see the front, but you can’t see the back because the government, media and companies don’t want you to see it. So we split our album up in two sides. The second concept in our album cover is oil. We used oil, because we think oil brings loads of misery in the world. The girl you see on the front is dripped in oil. All those themes are coming back in our lyrics. Our lyrics represent the positive and negative sides of justice in this world. “What Justice Is” represents a man who lives in misery, and it’s about a man who is rich. They both give their opinion about justice, but we allow our listener to make up their opinion.

How the video of “Coming Home” (HERE) was scripted, designed and conceived?
We made it together with Dominique Creative State of Mind and Bobby Regensburg. We sat down and we took a look at the lyrics. “Coming Home” is about a man who lives his live as a banker, where he has to scam people all the time. He is sick of his live and he just wants to get out of the routine of scamming people. He feels pressure and he wants to get out and do the things he loves to do. That’s why we made 2 storylines in the video. One with the banker and one with the same guy, but outside and painting, which represents artistic freedom, something we label as very important.
We also illustrated this with ourselves in normal clothes (which stands for artistic freedom and doing the things you love to do) and in suits, which stands for pressure, scamming people all the time and being untrue to yourself.

Since Björn Strid sings in “Never Giving Up” – a successful song under each respect, congratulation! – I just had the perception that your sound is conceptually close to his last Soilwork: next to the power and to the melody there is also a refined compositional dynamism. Don’t you think?
We love Soilwork besides lots of other bands which we admire. To be honest, we didn’t look a lot to other bands while making this album. We wrote it with our hearts, and this is what came out. But thank you for referring “Justice Is…” to a massive band like Soilwork!

Thank you for dedicating your time to Metalhead.it and to those who read it. Please say something to them in conclusion, and I hope to come in Italy soon!
Well we love Italy! We cook a lot of Italian food (okay, we do the best we can), we dig your clothing style and it is our favorite holiday destination! (laughs, ndr) If you want to check our music, check out www.undawn.com and www.facebook.com/undawn. We would love to know what you think about it. Thanks a lot for your attention, we hope to do shows in your country very soon!