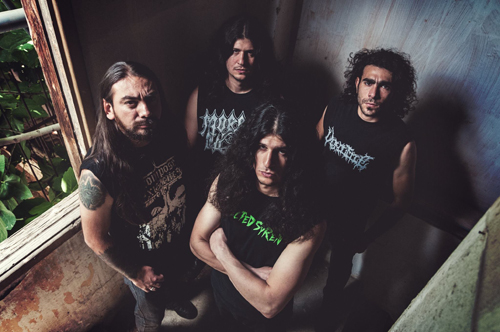 I’ve been truly amazed by “Pure Eternal Hate”, the new album of Cyprus deathsters Vomitile, and I think it’s no less than one of the best death metal releases of this year, side by side with Deicide e Monstrosity. It’s a great honor for me to have a chat with Khatch Yildizian, vocalist and bassist of the band. (LEGGILA IN ITALIANO…)

MH: Hello! First of all congratulations for your last album, “Pure Eternal Hate” (review here). I found it extremely brutal, but with that well set melodic component that makes it endearing, but still keeping that devastating impact. What reactions did you get so far from the scene?
KY:Thank you very much and glad you liked our latest release. Gratefully almost all the reactions were immensely positive and people really liked how we approached the albums material. There were some negative reactions but I would be lying if I said that I wasn’t expecting negative reactions, simply because there are always some that will complain for something. 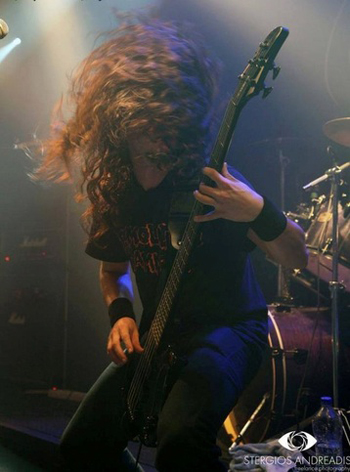 MH: I congratulated on the previous question, so this might sound contradictory: even if I personally consider your last release a great work, I’d like to ask if you can say why people should buy your album. I mean, you play brutal death, a musical genre that’s benefitting a revival lately, with a pretty much encoded soundscape. What’s your extra thing compared to the other bands around? Why a death metal fan shall buy your album?
KY:How I see it since I am still buying albums and listening to new stuff aswell, I would simply say that one of the basic reasons why someone should buy our album is because it gives you that feeling of a good old death metal vibe. Yes its mostly old school style but if you listen to it carefully and give it better attention you realize that its something between two schools, old and new, American and European style death metal.

MH: You come from Cyprus, a pretty unusual origin for metal scene. Are you a rare thing, or is there a worthwhile metal scene in your country, with other bands deserving audience?
KY:Well when we first started there wasn’t anyone who played that pure type of death metal. Sure there were some bands in the past but they were not DEATH METAL, maybe Melodic Death metal or something but never this form of DM. Yes the scene has gotten very good the past years with many almost pro like bands but unfortunately were still not there to call it an established metal scene.

MH: Connecting to the previous question, I’ve noticed that extreme metal is a transversal musical genre, some kind of universal language binding together Americans, Scandinavians, Arabs, and clearly people from Cyprus too. Apart from root culture and geographic origins, extreme metal gets played somehow basically anywhere. Can you explain such a wide spread?
KY:To be honest with you I never thought of it that way… I guess when it comes to a proper metal head or extreme metal head music is a connecting root for many different ethnicities and cultures. Music brings people together at the end of the day that’s for sure.

MH: The album reveals your strong impact. Is there any change to prove this seeing you live in our country?
KY:Our live shows is our strongest weapon besides our music. Here in Cyprus and anywhere else we have played we are known for our energetic and brutal live shows. Personally I am not into theatrical shows and all that crap when it comes to live shows, just high energy driven vibe. Hope we visit Italy soon for a kick ass brutal show. 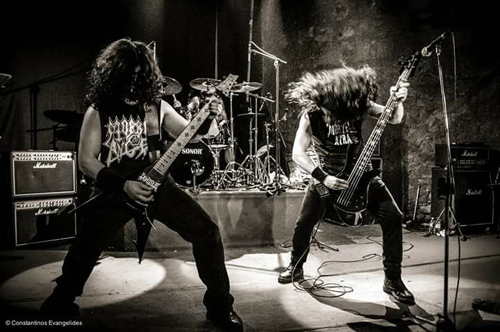 MH: We’re done. Thank you so much. Please close this saluting your fans and the readers of METALHEAD.IT…
KY:Thank you very much for having me in this interview, I wish you and your zine all the best, keep supporting extreme metal and till next time… DEATH FUCKING METAL!!!!