WHEN ICARUS FALLS, ‘We manage somehow to bring a “cinematic touch” to our music’ 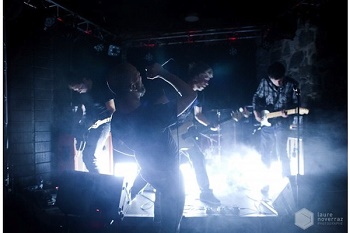 Here a nice interview with Diego, singer of WHEN ICARUS FALLS. We talk about the last ep of the band, “Circles”. Enjoy reading! (versione italiana)

Hi guys, and thank you so much for this interview! The band is not yet well known in Italy so I hope you’d like to introduce yourself to our public…
Thank you! Well, When Icarus Falls have been around since 2007 playing a “post-label-it-as-you-want” music influenced by bands such as Neurosis, Cult Of Luna, Mogwai and all this underground scene from the late 90’s. We’ve always been into those heavy built up sounds but I think we manage somehow to bring a “cinematic touch” to our music that defines what I think When Icarus Falls is: a good blend of heavy riffs and classical compositions.

Why have you chosen this wonderful name for the band? What do you want to express with it?
To put a name on your band is always a kind of tricky funny process to go through. We were just looking for something that echoes our work and voilà here’s When Icarus Falls. Simple as that.

“Circles” is an excellent ep, and “The great North” is my favourite song. Would you like to tell me something more about this track?
Thanks for the nice feedback. The Great North is a metaphorical journey through the modern occidental society where mechanical/technological progress seems to have given the rhythm to human life. It’s quite confusing when you’re walking in the street and all you can see around is people staring at their phones like zombies and texting about the present instead of living it.

In my review I compare your music to the “Oblivion” movie soundtrack. Do you agree?
I did not see the movie but I heard that the soundtrack was made by M83. Sorry I can’t agree or disagree on that one.

Can we expect a new full-length album in the next months? What are your plans for 2014?
Circles is the last release before a long break. We reached a point where I think we told everything we had to tell with When Icarus Falls. Maybe we will come back later with a different project but for the moment we really don’t know. From 25th april to may 10th,  we’ll be on tour so it’s a good opportunity to see us live!

What means for you to play ‘post-metal’ (if you agree with this definition of your music)? Is there an ‘ideology’ behind your songs?
Labelling a music or a band depends a lot on the musical background you have. So far we had quite a lot of different definitions. Which is good and I don’t blame it because it means that we have different listeners and that our music evolves from an album to an other. So if we’re now “post-metal” with CIRCLES that’s cool! To answer the last question, there’s no ideology behind our songs. We have quite a lot of dark songs but When Icarus Falls is more a “catharsis” band where all of our anger, frustrations are expressed.

I leave you as usual the end of the interview. Thank you very much for your time and see you soon!
Thanks a lot for this interview and be prepared because we will tour in Italy this Spring!