ALFAHANNE, “we label us as Alfapocalyptic Rock and not metal….” 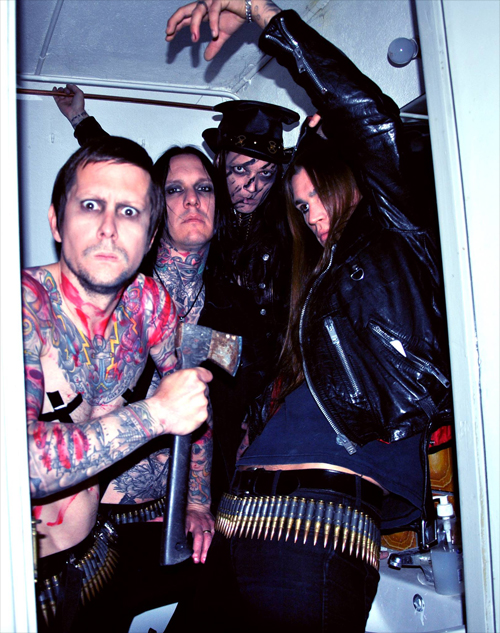 Shattered, amazed and hit the stomach after the amazing “Blod Eld Alfa”, I got the chance to interview the Alfa-guys. Well, I managed to ask my weird question to Fredrik, the guitarist of this Swedish band belonging to no genre and all of them at the same time. They attract black metal fans, but they are not black metal. They are extreme, strange, they lead to excess. I tried to better understand this sound, and what’s behind, because it’s taking my sleep away. And what he said answers some questions, but gives birth to new ones… (Leggi versione in Italiano)

MH: Hello! Thanks for taking the time to do this interview. Let’s go: despite you being with Dark Essence Records and hailing from Sweden and somehow belonging to the Black Metal scenario, people still ignore who the hell you are (this won’t last much, trust me). Do you want to say something about it? Why aren’t you in metal-archives.com?
F: Thank you for your interest in the band and the interview. Building up a fan base take it’s time but the Alfa Hordes grows day by day. I think our albums and specifically our live show draws attention to us so more and more music lovers discover us. Regarding metal-archives they won’t have us since we label us as Alfapocalyptic Rock and not metal…

MH: “ALFAHANNE” I was wondering how you say it in Swedish -but you replied with the opener of the last album- so I’d like to ask what this moniker really means, where it comes from, what is hidden behind.
F: Alfahanne translates to Alpha Male. I guess that no further explanation is needed. Think of it as it takes an Alfahanne to dare to walk your own way and to stand by it. And we are ready to defend our territory. It is also a measure of provocation in choosing a name like that. And it makes us always hungry to live up to our name.

MH: Fine, I had to ask you two basic question…job done. Let’s get serious: I dared to compare your music in “Blod Eld Alfa” … to Beastie Boys (review here), and I even explained why. Digitally been unfriended by many (I loved it!)… but… Do you hate me for this? Do you agree with me? What’s your opinion?
F: I would say that if you compare us that way that is your experience and feeling of our music. Everyone is allowed to have her/his own opinion. Can’t say that we ever had a though in that direction. But Beastie Boys is a unique band with a lot of different influences music wise. So I guess it’s a legitimate comparison. We have the same open minded vision musically and the same aggressive expression.

MH: So after the Beastie Boys one I dig deeper: it’s been said you are a mix of black metal, classic rock and punk. In my opinion the “what you are about – list” should be much longer, so I dare to add “rap rock” with something that wants you to dance. The singing is basically a power rap (“Vänd Inte Ryggen Till” is a good example), and the music is a pulse that makes you move. What do you say?
F: Well, if our music makes you wanna move it is a good thing. It means that it makes you feel and gives you something more than the ordinary. And that is good. Music should make the listener feel. How it makes them act can differ from person to person. Some want to dance, some wants to fight, some just want to freeze and listen and so on…. Regarding the vocals I think it is the way Pehr really means the word he sings and the aggression and feeling you interpret as rap… 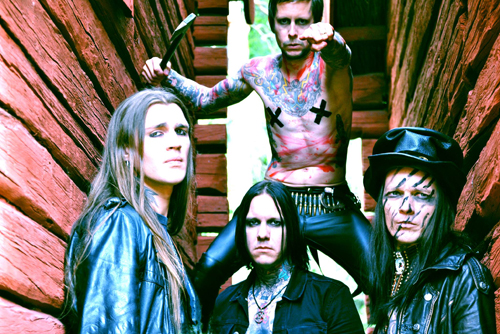 MH: I am attracted from the bass sound, I always mind how bass sounds in a album. And I find myself imagining a very funky bass line (with all the slap and that stuff) on songs such as “Besatt”. Would you?
F: I ask Jimmy about this and he responded with a “???” I can’t really find that funky vibes and there is no slapping going on, at least not on the bass…. We have a bass player that is almost as a third guitar, often with distortion but also Jimmy play all this effective bass lines.
(Fredrik misunderstands my question. Clearly there’s no funky bass on the song. I was trying to find out whether it would fit, if the song would accept that kind of bass line. But being a third guitar … well, probably it wouldn’t…)

MH: Tremolo is usually a playing style used for brutality, violence, or aggressive sounds. You make it almost pop and pulsing. How did you do?
F: Don’t think we use that much tremolo. We use a lot of reverb and delay to recreate the thick sound of the 80`s. Also we don’t think that much when we record our albums. We feel and do.

MH: At Metal Festival 2014 you’ve been interviewed and you said “the record is pretty much live recording”. How do you manage to be all together in the right mood to record live and deliver that vibe, that pulse, that emotion in studio?
F: It can shortly be described as Alfahanne is a band and no project or something we take lightly on. We share the same vision and ideas about how to write good music and how to express it. There are no exceptions from that vision. With Alfahanne it is one way in, no way out. Also we are like a generator of energy. Every time the four of us are in the same room or at the same stage this energy is just there. So it is not hard for us to come in the right mood and so on. It just comes naturally. It is more like we can’t stop it….

MH: The percentage of people speaking Swedish around the planet must be pretty much close to zero. But you don’t give much of a fuck and sing in your own language. Probably the clean singing helps, but listeners (me included) find themselves singing (well, trying to…) your songs (“Besatt” is dangerous for this!). What do you say about this?
F: Singing in Swedish is what came naturally when we first started out. It is a language that goes well with music and it is easy the get the lyrics just right. We never had, nor will we have, any plans to change that. And still the music speaks for itself and should give the listener the felling we want to express whether you speak Swedish or not. 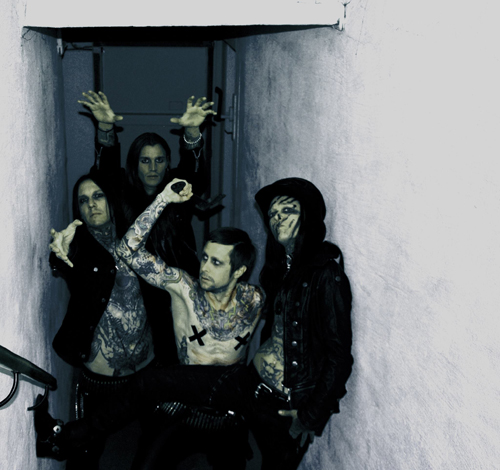 MH: The funny thing is that we have no idea of what the hell we are singing about… any hint?
F: Alfahanne is a way to express our feelings towards the human stupidity and wrecking of this world. We are like a mirror of what is going on around us. And most often we are surprised that so few can see it. Everything Alfahanne is about is a concept in itself…Fuck the world. That is what we are communicating. And I guess that is an Alfapokalyptic philosophy.

MH: While thinking of these questions I was also surfing to actually purchase the album. I tried label, amazon, and few more. Simply there is no vinyl version. Please tell me why there’s no vinyl… or whether it will be release later…
F: The vinyl is on it’s way and will be out soon. Sometimes it takes a bit longer than expected to get it all out there.

MH: What about the guests? You had few ones. How did you fit their different styles and image into your … very different style and image?
F: First of all I must say that the guest vocalists we have had on both “Alfapokalyps” and on “Blod Eld Alfa” has done an extremely good job and we are very happy with their work. Regarding how we choose our guests it is based on the fact that they in one way or another share our thoughts about music and we think they fit in our records. There is not any playful elements involved unless the enjoyment of working together with friends. We find it natural to invite friends who like our music to guest and we think it gives an extra twist to some of our songs. 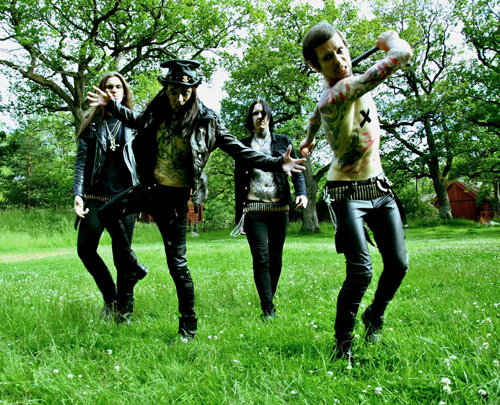 MH: Black metal isn’t just a music style. There’s a lot in there. Given that your music is not black metal (since it is Alfapocalyptic Rock), how “black metal” are you, under all those other aspects?
F: We have a past in that genre, as well as in many other genres. I would say that we are not black metal at all. We are Alfapocalypic Rock. But our past in the Black Metal scene and us still listening to Black Metal is one of the colors we use to paint our musical spectrum.

MH: Ok: I’ve been told you’re amazing to see live. Unless we plan a trip up there, when are you thinking to come down here?
F: We aim to play everywhere. It would be really great to play in Italy as well as every other country in the world. Hopefully we will come really soon!!

MH: Thanks again for the time. Please, say something to your fans, to those ignoring who you are and -of course- to METALHEAD.IT readers!
F: We’d like to really thank all of you who support us. Keep spreading the word about us and we will stay true to you and keep on doing what we do. Hope to see you soon at one of our shows. Hail the Alfa Hordes!!