AMORPHIS, “Soon we start touring then we be like a family again.” 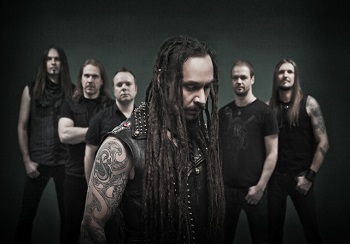 Amorphis is a symbolic band in the history of modern metal. They’ve been able to change their stile in a serious way, keeping  coherent to their style, and being able to produce a very identifying sound, very personal, unique. They arrived to their 11th album, and over 20 years of career. Now they’re ready for another tour. We had the chance to talk briefly with Niclas Etelävuori, the bass player, and he told us something about their last effort titled “Circle”. (versione italiana)

Hello, thank you for this chance. Congrats for the new album and the long career! Here my few questions:
The cover, as declared, is inspired to Alphonse Mucha, the Czech painter. Can you describe what is so attractive out of Mucha style and how it fits with the concept of the album?
We wanted something different for the cover as we felt the music had gone through a change. Tom Bates is the cover artist and there’s some similarities with Mucha but it was never our intention to make it look like a Mucha painting. We thought the picture fits well the concept of the album it has some elements from the songs.

I see that the lyrics on the album have been written by the great Pekka Kainulainen. The band isn’t writing his own lyrics since the departure of Pasi. This is something weird that the bands members aren’t credited of what they sing. Isn’t there in Amorphis the need, the desire, to write your own lyrics and sing them out? That desire of writing music for a lyrical concept you’ve in mind? Or isn’t Tomi (Joutsen) willing to write what he is supposed to sing?
Tomi wanted Pekka to write the story. We didn’t want to use Kalevala so we needed something else. Tomi had the idea but Pekka is the poet so he wrote it in a way we couldn’t have done, he was looking for a strong concept. As the music comes from different people maybe it’s better the lyrics come from one place to kind of glue it all together.

This time the topic of the concept changed a little, even if it stays close to the finnish magics. Is it possible, in a future, to approach different lyrics concept? Would that affect your music, as it always seemed to be created for those finnish traditions ideas?
Everything is possible, I think this was a step away from the Kalevala stories but in the same time it has become kind of identity of the band so I guess the “mystic” lyrics will always be a part of us. We always write the music first so in that way the lyrics won’t effect it that much, maybe sometimes we have to arrange a bit to make it fit.

I feel that since Tomi joined the band, Amorphis sound got heavier and heavier. It keeps its folkish feeling, but with “Circles” I completely feel those mellow, but distinctive, sounds that were common in your albums up to 10 years ago are completely gone. “Circle” appears to me as the heavier Amorphis album since the death-style days. What can you say about?
I don’t know if it’s heavier but all the styles are maybe more distinctive, if there’s a heavy part it’s really heavy and so on. We used a lot of real organs etc which gives it a more organic feel that was present on some of the older records too.

Esa (Holopainen) declares that the album “has all the elements you expect from AMORPHIS”. This may be a dangerous statement. Where do you place the limit between “sounding like the band’s style”, which is the recipe to keep the fans loving your style, and “sounding always the same, lacking innovation or new ideas”, which could be dangerous too, but also it could be a natural evolution to your sound.
For a band that has been around for over 20 years if you couldn’t recognize the band from the new album something would be wrong I think. We try to sound as fresh as we can but without loosing the sound people know us for. If we made a record every 10 years they could probably sound quite the same but we make 5 records in 10 years so for our own sake we have to experiment with new things.

Can you tell me something about the production process. Instruments are very clear, it really feels that Tägtgren did an amazing production work.
Peter was amazing, we had a very similar idea where to go with the project so working was just fun for most of the time. We spent about 5 weeks in the studio with him, it was a very intense period and we are very pleased with the outcome. We didn’t have a producer for the whole album in over 10 years so it felt really good to have another pair of ears with us in the studio.

Line up looks stable now. Well, it hasn’t changed since 2006 or about. How is the relationship between the member of the band? Are you friends or workmates? Still hanging out together like any other band in the early days, or family and life is keeping your contacts limited to music (recording, rehearsing, live) only?
We get along great although we don’t hang out that much outside of the band, we meet enough anyway. Soon we start touring then we be like a family again.

How is Amorphis doing in these days where people are losing jobs, governments are in crisis, and so neither the music industry can be doing that well. Is recording album and doing shows still enough to carry on and live well?
It’s hard but at least we have that and we get to work independent from governments and corporations and so on, so at least they can’t fire us.

Ok, thank you very much for your time. Please, close this interview with some message to the Italian Amorphis fans and the readers of Metahead.it
Thanks for supporting Amorphis, I hope to see you all in Milan in november.