BLINDED BY FAITH, “To last that long in the black/death metal scene you need to be really extremely motivated, because you don’t do that for money for sure!” 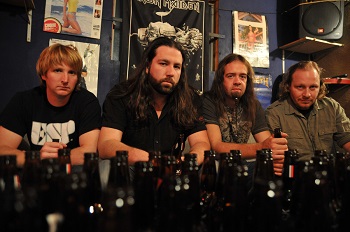 Interview to Blinded By Faith

“Chernobyl Survivor” is a title that calls back a fact that could easily mean the apocalypse, that has created some serious damages anyway. Can you talk about it?
Survival is the main idea behind the album title.  As a matter of fact, we weren’t so sure the album would ever come out at some point!

After our second album “Weapons of Mass Distraction” some members that were there since the beginning of the band lest us and only three of us were remaining.  So after we completed the album, we were extremely happy about it and felt like survivors in a way.  Now we have a complete line-up and everybody is fully committed to the band and ready to rock!

I liked the double voice on the tracks, I mean growling and screaming together. A voice battle that makes the songs nastier and with more dynamics. How did you decide to go for this solution?
We wanted the vocals to have punch as much as possible, so that was the plan.  It gives a great effect especially at the end of the phrases.

I noticed that in your sound several riffs are inspired to Swedish death metal, Gothenburg style, so with a lot of melody, but you also accelerate a lot and the drums is pure massacre. Also, I feel some thrash metal inspiration, again played at evil speed.
I don’t see a question ,but I agree!  Here’s some other music we were influenced by during the making of Chernobyl Survivor: Lamb of God, Slipknot, Soilwork, All that Remains, Dragonforce and even early Genesis (watcher of the skies).

Three albums, some other editions, in twelve years, and a lot of important gigs. What can you say about yourself, with all the pride and passion for your activity?
To last that long in the black/death metal scene you need to be really extremely motivated, because you don’t do that for money for sure!  So of course, we take pride for lasting that long so far and especially with the positive reception of our latest album “Chernobyl Survivor” as five years went by since the release of our second album and it was quite a change in term of musical direction.

You come from Québec, Canada, a place that lately is offering some great music. Of course I am thinking about black metal, but what is your opinion about the metal scene in your country?
The metal scene in our country is alive and well with tons of great young bands such as Kalter, Depth of Hatred, Nordheim, Blackguard and Aeternam just to name a few.  So all is well!  And it’s a lot of fun to do gigs and party on the road with these younger bands!

Thanks for your time. “Chernobyl Survivor” has been released in 2012, please explain to Italian readers what they missed ’till today. Goodbye!
Chernobyl survivor is a brutal, fast-paced album with catchy and melodic passages.  We feel it’s our best effort to date and hope you’ll all like it as much as we do!  Thanks All!

(Alberto Vitale, thanks to Luca Zakk)