BOMBS OF HADES, “There’s not much new stuff added to the genre these days I think” 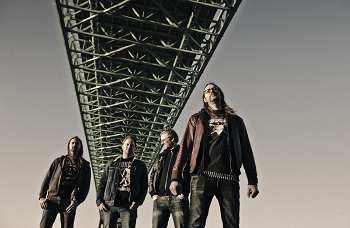 Bombs Of Hades means proud Old School Swedish Death Metal, created with true passion. Here we have Jonas Stålhammar, voice and guitar, to learn something more about this band that came to play live even in Italy. (versione italiana)

Hi there! Thanx for the interview! How are things doing for Bomb Of Hades lately?
No problem Alberto. All is good over here. We are in the middle of rehearsing and preparing for the recording of our third album at the moment. Recording starts February 28th.

Are you satisfied of the feedback for “The Serpent’s Redemption”, your second album?
Yeah, the response for the album has overall been very positive and we feel it took the band to a new level in many ways. These past two years since we started recording that album we’ve done alot more shows than on the first album (including a great gig in Bologna, Italy btw)

The cover of “The Serpent’s Redemption” is ballistic. How did you think to call Rafał Kruszyk, the author of the artwork?
Rafal did the cover art for our split with Usurpress and we dig his art in general so we just asked if he wanted to do it. He is going to do the art for the next album also. Let’s see how ballistic he goes this time (laughs, editor’s note).

You did several splits with Usurpress, Tormented, Suffer The Pain, Mordbrand. Do you think that splits are still useful to promote a band nowadays?
Very much so yeah. I feel that we’re always present somehow beacuse of our split and ep releases.

In addiction of the traditional bands, on the scene there are often new Swedish bands playing old death metal sound, and there are also other countries bands sticking to this music genre. I wonder if this music genre (that I love so much) could ever have already said everything there was to be said. What do you think about?
There’s not much new stuff added to the genre these days I think. To tell you the truth I don’t listen that much to it anymore or even the last 20 years. Still love the old classic records and once in a while there comes a record in this genre that totally blows my mind. But I still have a lot of affection for the genre though, otherwise I wouldn’t still be playing this kind of music you know.

Your name is going around a lot now thanx to the reissue of “The Serpent’s Redemption” in vinyl and the “Carnivores” EP (by Blood Harvest) and in May there has been that split with Suffer The Pain. So what’s the plan now?
As I mentioned earlier, our third album is in the works and if all goes according to plan it will be released in May 2014 by War Anthem Records on Vinyl and CD. In January we release a new 7” called “Recoil In Horror” on De:Nihil Records, a split 10” with Entrench on War Anthem and our first compilation CD with all our EP’s/splits/odd tracks between 2008-2012 and 4 new songs called “Through The Dark Past”  will be out on Pulverised Records. A vinyl version of this one will be out later this year.

Thanx for your time. Please close this with a message to METALHEAD.IT readers and italian death metal fans!
Thanks alot for the interview Alberto and for spreading the word in Italy. Hopefully we’ll be back playing in Italy soon.