DAVE BROCK (HAWKWIND), “Hopefully we learn from the mistakes of the past and make the future more pleasant” 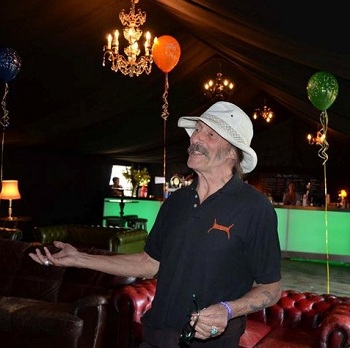 Hawkwind is over 40 years old, but doesn’t miss a beat. You always play live, you did 4 albums in the last 7 years. But you never really had a stable line up: different musicians, different people. How did  you manage to keep Hawkwind up and running? You must be a genius to do that.
Yes it is hard work keeping it all going, trying to get the best out of people.

On November 26th there will be two important releases. One is “Stellar Variations” and is released as Hawkwind Light orchestra. The other, that was somehow announced few months ago, is “Looking For Love In The Lost Land Of Dreams”. It is a solo album of yours, but on the press information I read your words “It’s an album that was created using different recording techniques. It’s a collection of recordings that capture those magic moments that one tries to achieve in the studio”. Can you tell me about when this music has been originally created?
Looking for Love in the Lost Land of Dreams was created over the last 5 years, in-between working on Hawkwind projects. Stellar Variations was created last winter when the weather was very bad and Hawkwind projects had to be put on hold.

Given the vast creativity Hawkwind has always shown, and the fact you have always been the mastermind behind it, what made you releasing something under your own name?
I have released 6 other solo albums over the years. Its good to have something to work on alone.

I am not a guitar player, but I’ve always interested in musicians equipments. Do you still use your Westone Spectrum LX? How many models do you own and what guitars do you use?
I still use my Westone constantly onstage and I also have a Gibson Artisan.

Dave, I’ve seen pics and video footage about your 2007 Wedding party. There was music, colours, an outer space cake, disguises, a lot of people… a very special day, but it really looked like a Hawkfest, a happening, a jet set party!
Yes it was quite a party. Me and Kris got married and we decided to have a Hawkfest and invite the whole Hawkwind family to celebrate and have a festival.

How about your former Hawkwind band mates? Are you in touch or something?
Yes I am still in touch with some of them……not all.

Would you still like to do music  with Lemmy and Nick Turner?
I would with Lemmy, we may be doing something soon but not with Turner.

I’ve two question about the Hawkwind live. The first is whether you are going to do a new event as Hawkestra, like that one at Brixton Accademy in year 2000.
No, organizing Hawkestra was too stressful.

The second is: why Hawkwind mostly play in UK? Did you ever really think, or got offered, about an european tour, and maybe also in Italy?
We do play in Europe, we have done France, Sweden, Poland and Spain in the last year. We nearly came to Italy, but the shows were cancelled at the last moment due to the venue closing! If we were offered suitable shows in Italy, we would love to come and play. Festivals are always good in Europe.

The outer space element is something that is part of the Hawkwind trademark. Hawkwind is a band from outer space! You wrote lyrics that are pretty actual, that foresaw things, and I suspect that the Maya prophecy has been created by you. Tell us the truth: space and science fiction, is it something you like and need, or you played around it building up the band image?
Yes it is something that we are very interested in…..always looking to the future!

If you could guest some great artist out of the golden age (60s, 70s), who would you choose?
Jimi Hendrix

You played music in the 60s, 70s, 80s, and so on. You witnessed new technologies applied to music, a music business always different, mutating cultures and societies, drugs and everything. So, Dave, how do you see the past and the present?
Hopefully we learn from the mistakes of the past and make the future more pleasant.

The Hawkwind have many fans in Italy, greet them
Hello everybody, Hope to see you soon!  Ciao a tutti, Spero di vedervi presto!

(Alberto Vitale)
Thanks to Luca Zakk for his collaboration