DOMOVOYD, “I’d want to believe that there is more involved than simple brain impulses.” 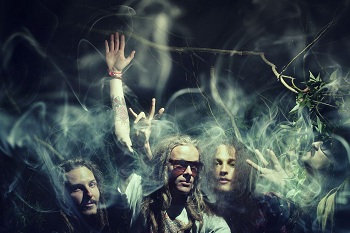 Music to be perceived, rather than listened. Sounds merging into music, music becoming sounds. Space landing here, the earth going to the stars. Their album goes far away in every imaginable direction. Before they disappear to the next parallel dimension, after having happily reviewed their great album, we managed to teleport Oskar’s (voice and guitar) words here, on this mortal virtual reality…(versione italiana)

Hello there! Amazing work your “Oh Sensibility”… what about some question to reveal what’s behind this project, what hides in this fog…
Yes fog. Your sound dark, hypnotic… creates a fog. And this is a debut, after some underground… tell us who you are…
Oskar: Greetings! This fog you’re talking about is created by four fellows who met each other at Kaustinen College of Music in 2010. That is where Domovoyd got started. Since then we have re-located ourselves to our original hometown Seinäjoki and that is where we practice our magic these days. We are people on an expedition to experiment on the weirdest of sounds.

“Oh Sensibility” is great. But I first want to know about the cover…
Oskar: Glad to hear that, thanks! We believe it is important to always offer a comprehensive experience when talking about albums, so it was quite clear from the start that “Oh Sensibility” should feed your head not only musically but also visually. The artwork was made by Aino Autere who is studying visual arts in Tampere University of Applied Sciences. Besides of being a skillful artist, she is also Dmitry’s (bass, editor’s note) fiancé so it wasn’t hard for us to find someone for the job. The album wouldn’t be as striking as it is without the amazing artwork she made. We wish to leave the symbolism as something everyone could think for themselves but I can tell you this much that the artwork is related to the story and symbolism of the name “Oh Sensibility” which we borrowed from Otto Muehl’s performance with the same name.

Musically I feel you have some roots in the sound of bands such as Hawkwind somehow… you also sound quite like “outer space” alike…
Oskar: Yeah, I guess it’s quite obvious that space, inner as well as outer and as far as it goes, is something that influences us greatly. We are of course honored to be compared to Hawkwind and a number of great bands that we appreciate but after all the roots of our sound can be found from the prog rock epics as well as from reggae or IDM (Intelligent dance music, a sub-genre of electronic music, editor’s note). Although we have a large spectrum of influences from many fields of music, the main thing for us is to sound like Domovoyd.

Stoner, sludge, drone, doom, space, psychedelic… is there anything else in your music and inspiration I didn’t notice?
Oskar: I think it’s as hard for us to categorize Domovoyd as it seems to be for everyone else, so I’ll leave my answer to this one be the same as to the previous question! (laughs, editor’s note) 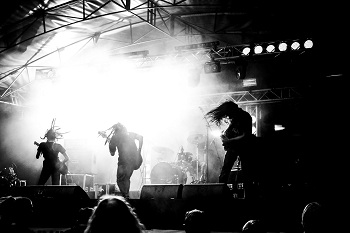 Anyway there are many influences ending in your sound. What’s the process to create this?
Oskar: We rarely have anything in advance when we make new songs. Jamming and improvisation have the most important role in the process, so when we get a spark from a riff, rhythm, melody or a feeling then we start jamming and everyone adds their own thing to it. Pure spontaneous feeling works as a the main guide but powerful dynamics and a dramatic arc of the song are also considered important for us.

You got tracks with a regular length, but some well over the ten minutes. Is it you deciding how long at track should be, or is the track itself demanding more?
Oskar: In the light of my previous answer, I’d say that the track demands it’s own length.

Sometimes your sounds is relaxing. Some other times it drives people crazy… pure madness going extreme…
Oskar: Nice to hear that! Madness can be also clarifying so it is important to have relaxing moments too for a greater experience. Sometimes you need chaos and destruction to build an improved and more stable version of yourself and that process, which is filled with indescribable feelings and experiences, is at least for me one of the most important things to manifest in our music.

So,if you know…how do you create one of these songs? Or is the song simply landing here from wherever  in the galaxy?
Oskar: I think the most logical answer would be that these songs come from our heads but as a man who is greatly fascinated by mysticism I’d want to believe that there is more involved than simple brain impulses.

What’s the plan after this debut?
Oskar: We’re doing as much gigs as we can in Finland for now and hopefully we’ll retreat to studio for our second album before or during summer. We have great plans and we’re probably trying a whole different approach with the second album, but time will show how it goes.

Ok, thanks for your space and time. Before getting back to the dimension you belong to, please close this with few words to METALHEAD.IT absurd readers…
Oskar: Thank you for the interview and in the words of our dear friend Hunter S. Ala-Lahti: SUPPORT THE PSYCHEDELIC YOUTH!