HAMMERFALL (Fredrik Larsson), “We have boundaries for what Hammerfall is” 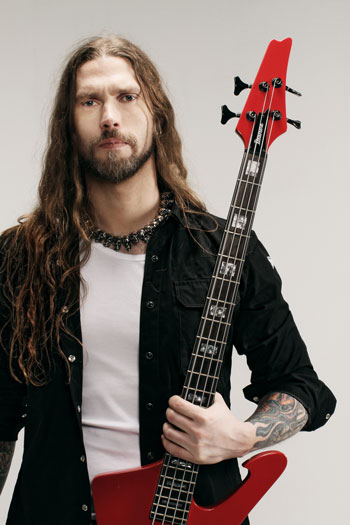 They packed us in the ticked office of the venue, the January 29th. And in there we managed to ask few questions to Fredrik Larsson, the bass player of Hammerfall. And thankfully their manager showed some mercy and dragged us in, as the things were pretty confused: I was with people that should have interviewed other bands members, the timing was screwed up… the dinner time for the band was on, add few delays … and my interview with Fredrik turned into a B-series press conference. Luckly Fredrik enjoyed my questions and I managed to capture few details from inside the band. Here it is (italian version here):

MH: I liked to interview you because you were in the first album, then quit, then got back somewhen… so you kind of have a vision from outside the band and also from inside the band. On my review for the last album I basically wrote that for 20 years Hammerfall have been doing the same stuff, singing the same songs, in a way, but it’s the only way it should be. Nobody would be interested in having a -i.e.- progressive version of Hammerfall…

FL: No, We have boundaries for what Hammerfall is. And that should be classic heavy metal. If we want to do something else, we do it on side projects, so whatever that we wouldn’t call Hammerfall, so this is the way we think Hammerfall is going to be presented outside.

MH: You don’t write the lyrics, but how is it possible keep on singing for 20 years about glorious thematics…

MH: … and still find new words! And catchy ones!

FL: (Laughs) That is wrong, it’s not so obvious! (laughs) Usually when Oscar writes a song he names it as well, and then he hands it over to Joacim, so Joacim has to interpret that title of the song and write something about it. And how he feels about that words, or title.

MH: A question about the fame of Hammerfall, and how it is in Sweden. I remember that some 10 years ago before you joined back the band did a video with the female curling team in Sweden… it’s clear Hammerfall got quite visible in Sweden. So how is it for a band like this to be in Sweden? To be in your country? Are you a really famous band or some underground metal thing?

FL: We are a well known band. A swedish brand. So people is aware of us, of our name, and maybe Joacim, well, they recognize him for having been on that show …“Clash of the Choirs” was it? So that made his face really familiar

MH: A question for you, personal one, not as a band member. You quit back then because you wanted to play death metal, and Gothenburg is clearly the origin of the melodic side of that music. So what about your time outside Hammerfall and into death metal.

FL: Well, I mean, I got a lot of bands I played through, just did my thing, nothing famous at all. But I felt at the time I couldn’t concentrate 100% on Hammerfall and doing just heavy metal, I wanted to explore everything and I was more into extreme music, so it was better for me to step aside and let someone else to take my place.

FL: Yeah, I mean, there is not something that fits directly into Hammerfall, but we all bring influences from where we are, I mean, Pontus is much more seventies… and Oscar is not into that kind of music at all, unless it’s Kiss from the seventies (we all laugh). But… so I mean we all bring different flavours and put it in the Hammerfall…

MH: can we find those flavours in composition side or in the final part?

FL: No, in the final part. Because I haven’t anything to do with the writing process.

MH: I’ve a last question. Which is to understand. I’ve a son, 6 years old, and he loves the last album and he sings all the day a song I am quite tired to ear, and it is “Hammer High” (Fredrik laughs loud). I want to know what’s the alchemy behind a songwriting for make a tune so catchy and magnetic… you know?

FL: We always follow the Hammerfall path where we need those big choruses and we have to have catchy melodies to stand out from all those bands, doing the same thing but not exactly… the are often a bit more aggressive, maybe, and harder but I really like when the melody sticks …

FL: I guess, I think it got to do with … I mean a lot lot of Swedish bands have those melodies, it’s very important for traditional music in Sweden, I mean, Swedish music export is really big, I think it’s world second or third when it comes down to export music, so… that’s it.

Dinner time. Time’s up. Fredrik kindly gifts us with a minute for some pics, then he rushes away. It has been too short, too quick… but pretty intense. Exactly like the gig that followed! 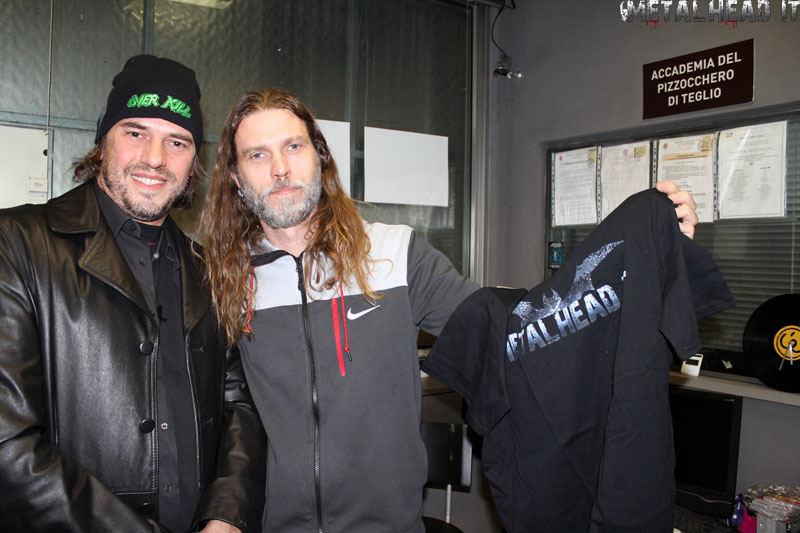