HORTUS ANIMAE, “And finally – here it is! This creature that has nearly driven itself alone was born” 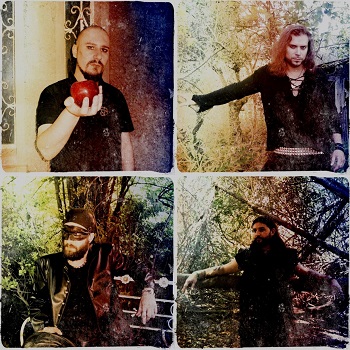 Interview to Martyr Lucifer, singer of Hortus Animae (he’s in up on left in the photo).

What happened after “The Blow of Furious Winds”?
Hello Alberto. Well, so, “The Blow…” came out in 2005 and we started our break in 2006, actually nothing really sensational happened, so much so that we had started to play some gigs in support of the album, we had also started writing new material for the album that was supposed to be its successor. Then we found ourselves overwhelmed by our daily vicissitudes and, little by little, we ended up on-hold without even being talking about it. However, the desire to record a new Hortus Animae album has remained latent in each one of us for all these years and then when we finally got together and decided, it was almost as if time had never passed! The difference is that each one of us had accumulated over the years a musical, cultural and technical knowledge to be fully put in the service of “Secular Music”. Not going too much into personal, life has been a bit turbulent, full of fortunately nice events, but not for the band in this case. Then considering that we were already having a break, every one of us has a bit followed his way, musically speaking. I assume we also felt the need to do personal things, or even just to try something different. At the end we have never completely left the music scene, I started my collaboration with the international Space Mirrors project, initially I gave a hand to Opposite Sides and started my solo project Martyr Lucifer. But also Hypnos, Bless and Grom got involved with many different musical projects.

How did you get to “Secular Music”? How much time did it take to write it?
As I said, we were already busy with our various projects, the band was on hold for almost 10 years, and despite this we continued to get requests from fans for the now hard to find old albums, compliments and requests for our return. We have re-released the old albums in the collection “Funeral Nation MMXII”, we continued to receive a lot of feedback and it was probably a sign that it was time to take the dust out of our weapons again. So we met again, we talked and talked again and at last, gradually, initially each one of us began to write something. Then when we already had in our hands a lot of riffs, ideas, melodies, etc. we started doing things seriously, meeting more when we could, putting pieces together, completing the puzzle. And finally – here it is! This creature that has nearly driven itself alone was born, without any special effort on our part. Then the lyrics and the general concept came themselves, everything was already in the air, only to be seized. The magical process of the union of words and music took place later at Domination Studio of the always excellent Simone Mularoni. The time it took to write the album was relatively short, about one year counting since we started drafting the first demos till when we got the master CD. But there has been a myriad of downtimes between an evolutionary stage of the album and another, cutting them off, I would say the complete period of drafting could hover around 6 months. We also used song-writing methods completely new for us, such as the use of file sharing, for example; we didn’t meet so many times during the song-writing sessions, almost we have not met even in the studio, but the newly found chemistry between us has been so strong that we haven’t even felt the need to give each other directives and/or suggestions.

I had the feeling that the name of Hortus Animae was well known outside of Italy… What kind of feedback do you have abroad? What is the opinion about your music?
It is true, perhaps we are even more appreciated abroad than in Italy in fact. I would say especially in the Slavic countries, but also in Europe, USA, Oceania, South America. As said, we have received messages and feedback of all kinds from all over the world. Speaking of how our music is implemented, well, it’s not a simple talk, let’s say that the variety of styles that we incorporate into our sound has always been our joy and torment, not everyone is able to digest it, especially the extremists, but the more open-minded listeners really appreciate it. Let’s say that when we read statements like “I’ve never liked black metal, but I can’t be without your music” gives satisfaction in any case.

The album surprised me, especially because it seems to me like a constant shuffling of the compositions, the sound … Everything.
Yeah, well , continuing from the discussion above, we have done nothing but to keep doing what we have always done, that is shuffling cards on the table, we didn’t give ourselves limitations before and this time even less, perhaps just with the difference that now, mentally, we found ourselves to be much more focused towards what was to be the final result. So “Secular Music” consists of, yes, the ingredients that have characterized us in the past, but treated differently, plus several new ingredients, the result of our musical and artistic growth over the years .

There is a cover of Jethro Tull. An adorable band. And you’ve chosen their most famous track, “Aqualung”.
Yes, it is a tribute to a great band, and to our origins, even a little to our parents… You cannot start something new without looking at the roots. Then, as you know, we’ve always enjoyed doing covers. We like to take important songs for our musical growth and make them our own. It seems that so far we have always managed it well, with the bizarre and personal interpretations of Mayhem (still clamorous to this day the way we mixed them with il Balletto di Bronzo and Mike Oldfield), Queen and Dead Can Dance. “Aqualung” by Jethro Tull is no exception.

In the review I did not express my opinion on singing, so bad of me, also considering that since my first approach to the album, I noticed this time you’ve sung like you’ve never done before. What do you think?
Thanks, you’re very kind. Well, let’s say I wanted to give a new mark to the vocals’ side of Hortus Animae, trying solution never attempted before, still keeping my characteristic style but also trying to make the parts even more rich, in the meantime, I also took singing lessons and perhaps you could hear that. In any case, it should be stressed that each one of us has gained over the years a greater awareness of themselves and their vehicle of expression, and I think that this is reflected overbearingly in “Secular Music”.

What ideas and insights the lyrics come from?
The inspiration comes from life itself, from everything that surrounds us. Obviously everyone (and especially) artists have always said they’re living in odd and difficult times, and I am no exception in this regard. Of course, like any other artist I filter everything through the prism of my personality, rework, and create according to my beliefs, my interests, obviously my madness and quirks. The concept of apocalypse is a concept that’s as old as the world, nothing new. But the point is this philosophy of Creation, Preservation and Destruction which focuses more on destruction in this very album, but not only. After destruction comes a rebirth. For some people the apocalypse has already arrived, they’re abandoned to themselves, alone, with only ruins around – sometimes each one of us may feel that way; there are those who are afraid of this day, let’s say in the “traditional” way, there is the anger of those who feel that we are the cause of our evil, there is a rebellion against all this… Sometimes the result is giving up, sometimes a quiet awareness, maybe some light of hope. Taking cue from all this, I indulged myself and gathered ideas from my a bit twisted imagination, perhaps, and also from ancient forgotten spiritualities, in this period reborn – speaking of that whole cycle I mentioned before. In short, it is difficult to explain where and how lyrics come from. It is a process that is all a mystery, sometimes also to myself!

Flicknife Records is a highly respected label that mostly releases experimental and psychedelic albums. Do you think being in their roster will give you good satisfactions?
Yes Flicknife Records is a cult label for those who follow psychedelic rock since the 80’s. It’s hard to make budgets now considering the album has just been released, but I can say the release of this album represents a challenge for both us and them, we are both walking on new ground. And since we like challenges, we found their offer more stimulating than others we got. I count that working together in a close-knit way we can achieve excellent results.

Will you promote the album live?
Yes, of course. Right at this time we are setting things up in order to play live, we hope the sooner possible. We have recruited new adepts in order to provide the best possible performance of our sound carried on a stage. So at the moment I cannot give exact dates but I can confirm that we definitely plan to promote “Secular Music” on stage.

Before we say goodbye, you can explain to me and to our readers your “Godless Years” work?
Well, when the double CD collection “Funeral Nation MMXII” was released, we realized we had a lot of other archival material that would have been a shame not to publish; and that’s how “Godless Years” was born, the album is double, consisting of 24 tracks including 2 brand new songs (cover versions of the death metal bands Entity and Baratro), demos, alternative mixes, unreleased live recordings, etc. etc. It was also a great way to clean out the skeletons from our closet and start over. That’s also the reason we decided to set its release date on March 24, the same date as “Secular Music”. “Godless Years” was released by a label from New Zealand, Satanica Productions.

Thank you so much for your time and I give you space for greetings and more.
Thank you Alberto for this interesting interview. A message for your readers: give a chance to “Secular Music” and “Godless Years”, they contain music which can obsess, stalk and haunt your thoughts, your souls, your nights.