HUNDRED, “What people would refer to as the ‘spirit of the ‘80s’, I’d refer to simply as the spirit of metal”. 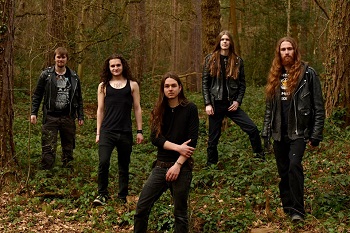 When a band mentions the first Wishbone Ash’s albums as the main influence on its sound, it is surely one of my all-time favourite! A warm welcome to Hundred, that introduces itself to the Italian audience with this interesting interview about the spirit of metal. Enjoy your reading!(versione italiana)

Hi guys (nb: my interview is with David Pike, Patrick Douëtil e Alex Storrsson, which answer unanimously) and thank you so much for this interview! So, who are the people behind the name HUNDRED and what is their mission?
Adamo Corazza, David Pike, and Alex Storrsson on guitars; Patrick Douëtil on bass; Tom Clinton on drums.  Our aim is simple: to play good British heavy metal, and have a great time doing it!

I’d like to know the name of the three bands (and no more than three!) that you recognize as your main models.
It’s hard to narrow it down to just three! Iron Maiden, Manilla Road, and Wishbone Ash’s early material are most influential to our current writing. We also draw influence from a range other progressive genres.

When can we hear an HUNDRED’s complete album? Are you already working on it? Are you in contact with a label?
We’re working on a number of releases, as the band’s sound is constantly evolving; we’d like to have an album out later in the year, most likely self-released.

What do you think about the ‘spirit of the eighties’ in the present European metal scene? In my review I’ve written that you are one of the few bands that sound exactly like the classic heavy metal should be… do you agree with this statement? Do you try intentionally to go ‘back to the roots’?
What people would refer to as the “spirit of the ‘80s”, I’d refer to simply as the spirit of metal.  The ‘80s, with the explosion of extreme metal, were the point of crystallisation of our ethos as a movement: gritty sound, mythic imagery, but a realistic message (“Only Death is Real”!).  As keeps happening with outsider groups in this society, heavy metal was partially absorbed into the mainstream during the ‘90s/’00s, as people became more comfortable with watered down forms of the worldview espoused by the various “originators”.  However, there seems to be a resurgence occurring at the moment, with lots of new bands championing the “old school”, trying to rediscover that more primitive edge that made the ‘80s stuff so powerful.  Hopefully what we’re seeing is the start of something even more ground-breaking than the ‘80s!

We’re not particularly aware of the current European scene, though we’ve played with a few UK bands that are definitely bringing back the ‘80s!  Check out Toledo Steel, Wytch Hazel, Dark Forest, and Forged in Black!

What do you do in your ‘normal life’? Is heavy metal a hobby or is it something more for you?
We are all occupied with work, education and family. Hundred has always been a musical outlet for us, and though we have never had the time to dedicate to Hundred as a full time endeavour our passion will lead us to the people who will allow us to follow the dream, and through that inspire them.

I leave you as usual the end of the interview. Thank you for your time and see you soon!

Thank you for your interest in Hundred. We hope to play for you in Italy soon!