HYPNOS, “if you do true work and do not give up, you will reach the shores of satisfaction one day” 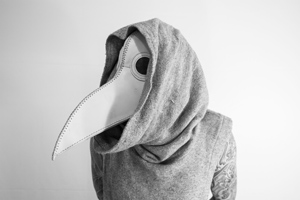 They just put pout an album that, as usual, will generate two shores of opinions. But Hypnos, after all, a pretty big in their country. So let’s chat with Bruno, voice and bass for this long time project. (leggila in Italiano)

MH:Hi there, and welcome to Metalhead.it! Congratulations for the last album! But let’s start with the questions. Five years have passed since the previous album. What happened to the band in this time range?

B:Thanks for congrats, we are also glad that we finally came up with the new album. Last years we were occupied especially with the live shows, including short tours with NAPALM DEATH, VADER or AMON AMARTH. These tours unfortunately happened in East Europe only. But I hope that we will get more opportunities to hit Western stages as well, including Italy, which we did not play for 12 years already. Beside HYPNOS, me and our drummer Pegas revived our previous band KRABATHOR, we did Brutal Assault festival in 2014 year and CZ/SK tour in 2015. This was not as easy especially because of the fact that 2nd Krabba mainman Christopher lives in USA for 12 years already. And finally, I was writing my life story book entitled “Revoltikon”, book was published in August 2014 and sold out in 3 months (800 copies). So when you imagine that beside above noted issues, we even needed another cca 18 months to write and record new HYPNOS album, it is clear that we were quite busy. Maybe we lost last 6 months because I was late with dealing with Einheit and first possible release date was March 2017 but nevermind, we are happy with the way it all happened and support we are getting from the label.

MH:Since the first spin, it’s clear the album stands on a well looked after composition. Can you reveal how you create a song? Is there a standard procedure or you just get inspired by the moment?

B:I mean both, I am playing guitar in my living room on my big Marshall cabinets, loud, mostly in the dark and trying to bring the riffs I like. I have to say that I also mostly know the title of the song I am writing, it helps me bring me into the right mood. When the song is done in my eyes, I record demo with click and video of fingerboard and send it to my guys. First rehearsals we do just with drummer Pegas and make the final arrangements. When this is ready, we rehearse with whole band and it is done. 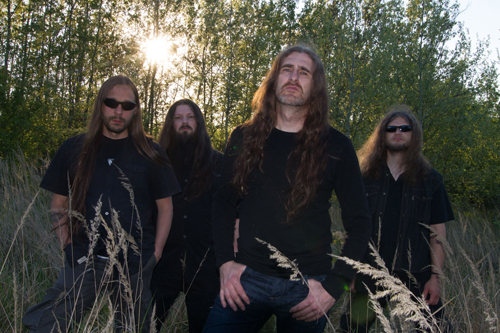 MH:It’s not just composition, but after 20 years of career we can easily say your skill isn’t common. Do you rehearse and practice a lot with your instruments, voice included?

B:Not really (Laughs, editor note). We rehearse just shortly before album recording or in case we have a long break between the shows. We are not from the same town, some of us has really big distances to my hometown and it is not easy to get together. Anyway, if you mean the clean voices on the new album, these are not mine but from the guest, Skuny of band Shatoon, friend of us.

MH:I asked that because the raw death metal that you and other bands are playing is often underrated. I mean, there’s somebody thinking it’s an easy style to play, and the technical part can be left in the background. But I think it’s the opposite: it’s a very complex music genre, both composing and playing it. What’s your opinion about?

B:Thanks…you know, we do not play blasting death metal but mostly mid tempo stuff (we mostly played) and for many listeners this is kinda boring listening. Our albums, especially the last one, need repetitive listening, it is not the love for the first sight. On the last album we focused on atmosphere, creating the real songs, not just collection of riffs. I really cared to bring the lyrical message close to all people interested in us, I wanted to sing about the things they also know from their own lives. We are one of them, we wanna shorten the distance between band and fans. But it is a long journey, such relationship does not happen from day to day…

MH:If I had to ask you what band invented that rotten and evil sound, that kind of death metal that style you somehow promote, what band would you name? I’d say Nihilist created this style. What’s your opinion?

B:Hard to say, it might remind different stuff to any single person. Yes, we grew up mostly on times when Swedish and Florida´s death metal ruled the world in early nineties but we wanna improve our own sounding to make something what might be a part of typical aspects for Hypnos. As I noted before, we are not the band playing fast tight blasting death metal, we are closer to classic rock or rock´n ´roll sound, even I do not like rock´n ´roll at all (laughs, editor’s note). Guitar, bass, solid bass drums, vocals….no loops, electronics, effects…..we would prefer to do it all by ourselves, by our abilities and not to use computer more than necessary. You can see that especially live, there are really some bands that sound awesome on the album but seeing the live you find out that they play half-playbacks etc. This is not really our way….

MH:In one side there’s tradition, but in the second part of your discography you had an evolution with a very personal sound. This thing, in my opinion, can be seen on the covers of your last three albums, something not belonging to the classical cover topic. The last one is pretty dichotomic, a mix of old style and modern graphic. Can you say something about how you did it?

B:I am saying that this is exactly what we wanted to reach and you hit the nail in the head (laughs, editor’s note)! We are afraid of clichés, they make us scarried and we do not want to belong to the boring average stuff. We would be bored by ourselves. We like to differ. This time we wanted to have simple significant graphics with majority of white colour.

MH:Do you think there’s any future for this music genre? For what I see here in Italy I’d say ‘NO’. What about Czech republic?

B:I do not know, I do not think of that. I wanna do what I like and to be enjoyed. Nothing else matters. I believe if you do true work and do not give up, you will reach the shores of satisfaction one day. But there is nothing without hard working….

MH:Do you listen to modern death metal such as In Flames or Dark Tranquillity? What’s your musical choice usually?

B: These bands are not my cup of tea indeed but we listen to many kinds of metal and music generally. We love for example bands from Leprous to Dodecahedron, from Kingdom Come to Meshuggah, from Hate to Gojira. And me personally, see what shows I visited in last weeks – Europe, Depeche Mode, Rammstein and Alter Bridge. I listen to bands from any metal style, there are my faves in each of them, maybe except of folk, pagan metal and metalcore. I am big lover of Abba, Aha, Joe Cocker, Duran Duran…I love complete 80ies music. Music is phenomenon and if you love that…. (laughs, editor’s note). 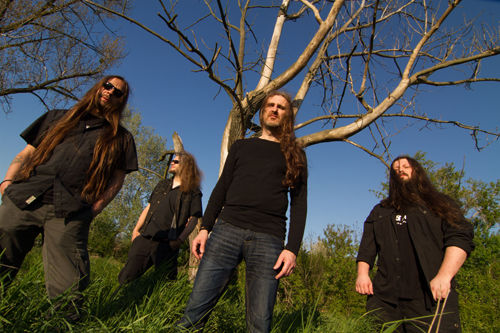 MH:Extreme music, in my opinion, is a great product for a vinyl. Do you think there’s some come back of this support, or is it just a pathetic commercial thing pushed by the majors to get some extra money?

B: mean that some people are really turning off the massive attack of electronic music, MP3, sharing… We are overloaded with stuff and if you buy yourself something so beautiful as a vinyl with large picture, inner sleeves with lyrics, the listen differs as well. I personally also turn into LP´s more than in CD´s these days. Especially I love classic 80ies and 90ies stuff when vinyls were most selling format. I buy almost any style, anything I love including soundtracks. You can buy that for a few Euro and make you so happy. I have great vintage gramophone, real masterpiece of late 80 ies made by Czechoslovakian Tesla factory.

MH:What about the future? Will we see you onstage anytime soon?

B:This year we have most shows booked since our comeback in 2010 year, almost 40. I hope we will continue with this trend in future as well and that we bring our music on western stages as well. And except of that, a lot of other work, I am just recording audio version of my Revoltikon book and planning another studio sessions and gigs etc. I hope to meet you my friends!

MH:Thanks for your time. Please, you can close this interview the way you prefer.

B: Anyone interested, follow our websites www.hypnos-cz.com or www.facebook.com/hypnosCZ, for example we published our 2nd official video from new album entitled “One Flesh, One Blood” a few weeks ago. Thank you Enrico for supporting our band. Cheeerz! 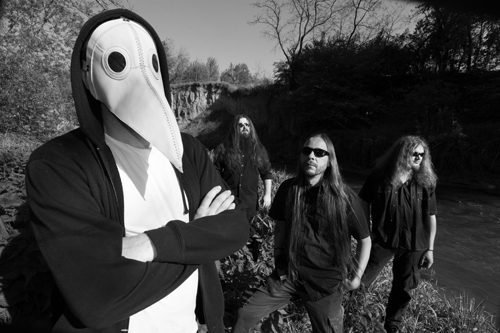