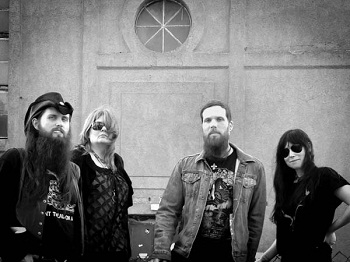 They craft emotions. Sensations.  Their music is hard to define, and you’re left with the sole thing that really counts: feelings. Feelings that are painted with dark colours. Gothic concepts, traditions, folklore, magic, spirits. These are the feelings you get, wisely exposed in a dark atmosphere, while a fog with a soul surrounds you. Music so hard to explain in words, so we couldn’t resist and needed to ask the band some questions, ask them to reveal those magic secrets they are able to turn to sound. Joshua (guitar, bass, banjo, vocals) and Kathryn (autoharp, hand percussion, vocals) turned out to be kind, hearty, passionate… with such a big desire to tell the world what Lux Interna is.  (Photo: Andreas Diesel) (versione italiana)

Hello! Thanks for the interview. Congrats for your new effort, it’s so beautiful. I got few questions for you: A new album. A new experience. Can you tell me how this opera got created?
Joshua: Hi Luca, Thanks so much for the kind words! Yes, this album was certainly a new experience for us… in many ways, it marks a completely new beginning for Lux Interna. The album is rooted in  a vision that came into clear focus over the course of a few years. We didn’t begin with a set concept per se, but rather let the music develop in as organic a way as possible. This way of working was important to us, because we wanted the music to be worn, living, and organic in feel and texture. With “There Is Light In The Body, There Is Blood In The Sun” we wanted to create a musical space that was wild, far removed from the noise and motion the urban world, where words and even the smallest of actions take on immense weight. We wanted to sing in an older tongue. I think the evocation of wilderness in this album sets up a double space, one that’s both inner and outer, wherein the world and the individual confront each other, through and within each other. We’re really interested in exploring this intersection between imaginal and physical wilderness. And since travel has always been an obsession for both me and Kathryn, traces of different wildernesses have left their mark on this album from our wanderings: from Lithuania’s stoic birch forests, to Northern California’s rugged mountains and redwoods, to the silence of Death Valley. The recording also coincided with a move back to the U.S. after some years living abroad, and this homecoming definitely had an impact on the sound we conjured. America is without doubt a haunted land: there are ghosts aplenty, spirits of all different shades…

Can you tell me something about the lyrics on your new album?
Joshua: In a way, I like to let the lyrics speak for themselves. I don’t want to dictate what they should mean to listeners, and can only hope that somehow these words, which are very personal to me, will speak to others and help express something about their own lives. I know many songs have done that for me, though I can’t pretend to have known what the songwriter originally meant. As I said, the lyrics come from a personal place; they are remnants of my time, my days with their struggles, joys, and sorrows. But they are also attempts to reach beyond myself, “outwards”, into larger patterns of meaning. In a sense, I think of writing as a constant dialogue between the small particularity of oneself and the massive, incomprehensible totality of the world. But it’s not just a dialogue. I think it’s also somehow a practice of trying to merge these two things, self and world, into a meaningful whole. I remember once reading a reviewer who thought that I was “pretentious” for speaking of our songs as altars: but that’s really how I think of them, altars where thoughts, feelings, and memories from everyday life are set alight in the hope that they will become something larger, more immense… If that makes me pretentious, then so be it! 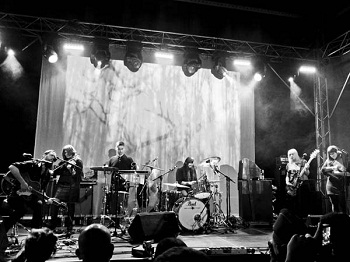 The cover. I cannot stop looking at it. Tell me something. All the meaning behind. (Photo: Tim Gotch)
Kathryn: Joshua and I have always had great respect for David D’Andrea and his work. We met for the first time in 2012 at the Stella Natura festival, David attended our live performance, and after just a few minutes of conversation, he and Joshua discovered that they share an interest in Jacob Böhme, a 17th Century Christian mystic. During the winter of 2012, Joshua and David worked closely on weaving together the symbols that compose the album cover image and vignettes; you can read more about the process that went into our artwork design on David’s website (here). We are very happy to announce that later this year there will be a limited special edition of “There Is Light In The Body, There Is Blood In The Sun” on his new imprint, Samaritan Press.

Joshua: Yes, David puts it well on his site. Suffice it to say that the heart of the album is expressed emblematically through this image.

You have always been associated to neo folk. But this album is something of its own. It’s spiritual. To me it leads you to a shamanic dimension somehow. Tell me more…
Joshua: I’ve never really seen us as a genre band… though I realize we’ve been associated with neo folk in the past. In an attempt to be true to the notion of “inner light” -both in our artistic and personal lives- we do our best to follow where the spirit takes us instead of trying to fit in with a certain sound or style. And though there are individual musicians and projects that we share a deep kinship with, I don’t think we’ll be ever really be exclusively part of any one scene. But yes, this album is particularly different. As I mentioned, this work marks both an end and a beginning for us; I think we’ve begun to explore territory that will take us even further away from some of our old recordings. You’re certainly right to note the importance of “spirit” on the album. I’ve always been fascinated with the connection between sound and spirit, it’s a connection very close to the heart of Lux Interna. I see the pairing of sound and spirit as quite natural. Sound, like spirit, is a liminal phenomenon, neither super-sensual nor purely physical; like breath, it weaves together inner and outer, respecting neither the boundaries of body or world. Echoes of the connection between sound, breath, and spirit can still be heard in the multiple meanings of the English word “inspiration”, though its original connotation of spirit possession is mostly lost to the dust of history. This connection of sound and spirit can be found in a multitude of religious traditions: some, for example, early Greek ritual, mystical Hasidism or ecstatic pietism, connect spirit with sung open-mouthed vowels and body with consonants: the former was understood as the free flow of expressed spirit, the latter as the limiting form that allows for a particular manifestation of something which, in-itself, is beyond particularity. Others, such as early American Pentecostalism, understood the musical overtones that occur when voices join together in chorus as proof of a presence that transcends the individuals involved. Sound has always been an integral element of ritual, worship, and communication with the “otherworld”, however that world is imagined. Sound is audible spirit and spirit is inaudible sound. This principle was axial on “There Is Light In The Body, There Is Blood In The Sun”. In this sense, we wanted the music to be “incarnational”: a facilitation of the movement of sheer spirit taking on flesh and skin. But this also hints at a second, counter movement: the physicality of bodies and instruments blurring into the shimmer of notes, tones, and rhythms – into spirit. 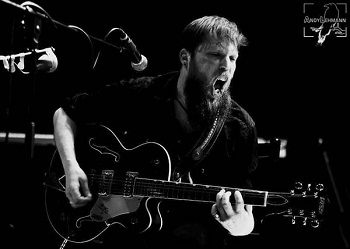 How does it feel playing such a special music, surely not for the masses, nowadays? Do you get enough feedback from the public out there? (Photo: Andy Lehmann)
Kathryn: I have to say that the response to the new album has been overwhelmingly positive. It’s been a total pleasure receiving letters from fans around the world, expressing their appreciation for our work and sharing the thoughts and images that it conjures for them with us. Generally speaking, our audience seems to appreciate that our work doesn’t fit neatly into genres. Though they may hear traces of inspiration, it’s not a sound that they’ve heard before.

Joshua: As Kathryn said, it’s been really great to hear from those listening. It means a lot to us when people get in touch and let us know that the music means something to them.

There are a lot of instruments being played on your music. How do you manage to bring all that onstage? It must be such a mystic show.
Kathryn: Our live performance has gotten much more complex in recent years. We tend to be between 5 and 6 people on stage, and yes, the sound is pretty powerful.

Joshua: The songs do change in their live interpretations. What we may lose in nuance -for instance I have to cover both the banjo and acoustic guitar parts on an electric guitar- I think we make up for in expressiveness. When we play music, part of our aim is get outside of ourselves, to step out of our everyday consciousness. This comes through most in our live performances, I think. What is most interesting to me is when the music seems to happen free of me, so to speak. In light of this, we leave a lot of room for momentary inspiration and improvisation. It is so rewarding for me to play with folks so talented that they are able to keep form and shape within this chaos of expression. One of the greatest things about playing live with the current formation of Lux Interna, which includes, aside from Kathryn and myself, Kris Force (mastermind behind the brilliant and inimitable project, Amber Asylum) and Adam Collins-Torruella (owner of the visionary Pesanta Urfolk label), is that we have such a strong connection to each other that we can improvise on the spot, when the spirit moves us. Indeed, one of the most important things to us is that our performances never be too scripted. We want to be (hopefully pleasantly!) surprised by the end of the show… 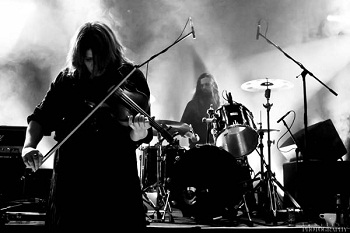 Talking about live shows. What is going on in the future? Any plan to visit Europe again? Italy?(Photo: labilis photography)
Kathryn: Joshua and I recently returned to California after a year in Germany, and I have to say we’re definitely happy to have our band mates close by again. We have a lot of new material, so we’re looking forward to working together and recording in the coming months. Currently we’re also planning out our live schedule for 2014, and yes, there is definitely talk of performing in Europe again in the not-too-distant future. We have a lot of wonderful fans in Italy, and would love to play our premiere performance there next year. I’m keeping my fingers crossed.

Joshua: If you have connections… please do bring us to Italy! We’d love to play there…

OK, thanks for your time, please close this interview how you prefer, telling something to the readers of METALHEAD.IT.
Kathryn: Thanks so much for the opportunity to talk to you, Luca. We really appreciate it.