MORGOTH, “…might be the missing link between ‘Cursed’ and ‘Odium’”. 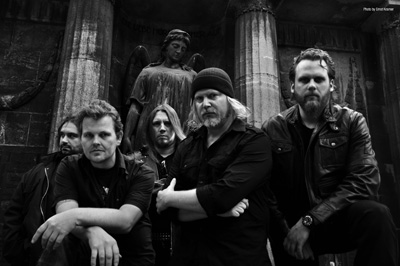 Three powerful albums in the 90s, the silence. Now they’re back. Full of energy. Aggressive. Showing us what Death Metal really is! I asked few questions to Sebastian Swart, guitars and songwriter… (leggi in italiano)

Hi there… thanks for the interview… let’s go!
Wow. Morgoth is back. Not something anybody would expect. Where have you been all this time?

Sebastian: we are back since almost 4 years now… between 1997 and 2011 we all did different things. Most of us did like normal work and Marc (vocalist, editor’s note) had some musical projects e.g. Insidious disease.

How did you get back to live activity -ie Wacken- and then back to studio again, all of you?

Sebastian: In 2010 we had be asked by some promoters, if we could imagine to play same live shows for the 20 years anniversary of Cursed that was released in 1991. Marc and me said yes, let’s do it but not without Harry, when he gave his final ok, everything started to work naturally and today we are, where we are. Still going on and entering the studio again for a new full album.

So: what has changed during the last 18 years. What’s the difference today compared to back then?

Music business has changed a lot since mid ’90. How do you see it, mostly compared to back then?

Sebastian: I don’t feel that it has changed THAT much. Ok, there is the Internet and digital sales. Record sales have declined and record companies have to struggle more today, but playing in a band and live still feels the same to me as back in the days. If I remember it right, remember, its 18-25 years ago!

”God Is Evil”: probably the most extreme song title of yours. I love it! It almost feels knocking at black metal doors. How come?

Sebastian: I wrote the lyrics to that song, I was not thinking about Black Metal. The title came up in the studio and I created the lyrics around it. I think they leave a lot of space for self interpretation and the reader can fill in his own name. I wrote the lyrics shortly after my mother died this year, that for sure was an influence but me being an misanthrope and not giving much about mankind tried to point out that there is nothing good in humanity and if there is something like a god or higher spirit in all of us then it must be evil.

Also the cover is pretty wild, this also is your most extreme one. Who did it? How did the concept develop?

Sebastian: The artwork was done by Costin Chioreanu who already worked for several metal bands like Arch Enemy. We gave him a Briefing how we imagine that the cover should look like and from that he came up with the actual cover. We liked it from the first second.

Your death metal is beautifully traditional, yet fresh and full of new energy. It was a blast to hear “that sound”, it was a long time, it almost felt like so damn new!

Sebastian: cool, thanks. What more can I say? we tried to pick up the early day feeling of old school death metal but without doing something that doesn’t feel natural to us. We went to a lot of different stages in Morgoth. 18 years ago we loved it to play sweet/sour slower tunes, today my favorite live songs are songs like “White Gallery” or “Burnt Identity”.

Ok, how was the songwriting process for these two tracks?

Sebastian: It really came out quite naturally. Harry and I contributed the riffs for the songs and the whole band worked on the arrangements. That’s how we do it with all the new material.

What about the album? Tell me all you can reveal… mostly how heavy it will be and when we’ll get it!

Sebastian: How heavy will it be? Good question… as heavy as it can get I think! When you like the two new tracks on the single you for sure will like the other stuff too. We have some more rhythm orientated songs as well and as I believe some very hooky verses and Refrains. Some parts are fast and brutal, others are melodic and slower. It is hard to say now but this record might be the missing link between “Cursed” and “Odium”.

One last question: in 2011 you did Wacken, as we said above. I wonder: how was public feedback? I mean, you sere long time silent, no new releases, a lot of young guys that probably never heard of you…

Sebastian: it went out ok for us and I think the people liked us. Also it was the first show Morgoth ever played in front of such a big crowd. It felt a bit strange at first but I believe we can be very satisfied with the overall reaction of the crowd.

OK, thanks a lot for your time. It was great!