THE MEATFÜCKERS, “the idea is simple: to get known on the metal world” 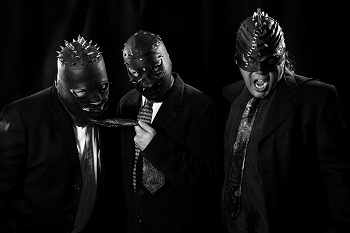 Of how many members is the band composed at the moment? The band’s Facebook profile says that there are two members. I found photos of the band where there are three members and four members and some internet sources indicate that there are five members of the  band. It’s a confusing situation!
I’m sorry about causing such confusion, being a DIY band is hard to update all sites were we have uploaded information! We are doing our best to have the most accurate information at least on our Facebook as well on our just renewed web site. So answering your question: the Meatfückers is  currently composed by 3 members: Reverend D. – Bass,  Rex Lucifer- Vox, Iracundo- Guitars.  Drums are done by computer, but we are looking for a drummer if anyone is interested.
I’ll try to make a long story short:  for the first 3 months of 2006, we started as a 5 piece band, but the other guitarist had to stop playing for a while, so we became a 4 piece band for another 7 months that’s when Reverend D and I started to compose the songs, took promotional photos and had our first gig, then the guitarist was able to re-join the band and we were a 5 piece band again. In 2011 our original drummer had to move to another city so we recruited a new drummer. But by July 2012, we had another major change: 3 members decided to abandon the band but by August 2012 Revered D and myself recruited Rex Lucifer to take over the vocals.

“Gangbang from Hell” displays a death sound terribly and proudly old. Are you a band that tends to go to the roots of the genre and return to the first artistic ideas which characterized it?
Oh man! Honestly we didn’t try to emulate such sound, it just happen that we are not very young guys (despite we may look like ones,  hahahaha!) By the mid 80’s we were teenagers so we went thru all the bands and sounds that now are called “old school”; so yes we are heavily influenced by that era. Basically we are playing what we enjoyed listening when we were kids.

I saw some of your videos on You Tube. Live you seem like hell which has arrived on earth! Also, you play and appear in photos with your faces covered. Is it only for show or is there a concrete reason behind this? You’re right, we are hell on earth! Since day one, Reverend D and I main intention was our band to give a great live and intense show to the audience. Originally, the masks were to add a mystery on stage, so audience didn’t know who was playing and for us was the chance to get an honest response from them, but we also use them to add another layer to the band’s concept and help us to have a visual differentiation.  Using masks live is very complicated, sight and hearing is diminished, so it’s really an extra challenge to play wearing them, but so far we like the look and we are working to have a more comfortable and usable masks. Anyhow we believe that the most important thing is the music not the image, so we don’t know if we will be always playing with masks, if we find some other ideas we will try them…

You are Mexican and there is always good music which comes from your country. What is the perception of the public and press of metal in Mexico? Is it a genre which has a sizeable following?
Extreme Metal in Mexico is basically ignored by press and general public. We are happy to notice that 80’s and 70’s “classic” metal band now are accepted by most media and people (Mötley Crüe, Iron Maiden, Black Sabbath, Judas Priest, Kiss) which 20 years ago was impossible to hear them on “normal” radio or them to come to play (to Mexico).  But for anything heavier than that is still difficult to have space on media and there are not many places to play either. So I’d say that is a niche genre. But despite all this, mexican metal audience rule!

How do the Meatfuckers maintain themselves? Are you musicians 7 days of the week or do you have other jobs? If so, how do you manage to make your daily life co-exist with your artistic life?
Good question! Here in Mexico is impossible to maintain ourselves being a musician, even worse if you play metal, so we need to have other jobs. At our jobs, most of the people know we play in a band, so we get good support for them, sometimes they go to our concerts, buy our material. So that help us in a way to blend our two lifestyles easily.

The debut album is on the market, what does the band propose to do now?
So first stage is to promote the band, recording, etc. that we have done so far, the idea is simple: to get known on the metal world. We have already recorded our second album and we are working to get it released hopefully by this summer. Then the second stage will be to promote the new album and to look to play in other countries and cities.

Thanks for your availability. I hope to hear from you soon about other initiatives. The Italian Metallers are reading you, speak to them directly….
I want to thank you for your interest on having interview us!. We are so happy about the great acceptance we have had with the Italian Metallers  please keep supporting The Meatfückers, Metalhead.it and Music Solution agency,  go to our renewed web site (www.themeatfuckers.com) so you can find some more stuff about us, if any promoter is reading, please bring us to play to Italy!! CIAO.

Thanks to Music Solutions Agency