HELL:ON, “If you survive our gig you’ll be bound to drink with us all night long” 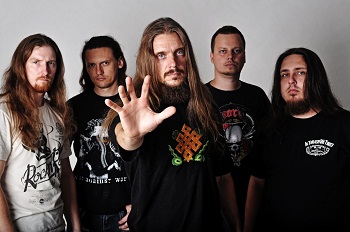 Ukraine, a not so easy place to be. There are problems, things must improve but it ain’t easy. But in this country there are also some great bands, some guys wanting to tell the world something, something like the heaviest metal ever. One of these bands is Hell:On. We took the change to ask them few questions…  and Alexandr Baev (vocals) and Anton Vorozhtsov (guitar) were happy to answer, proving they clever, professionals and with a cool sense of humor. (versione italiana)

Hello there. I reviewed you a couple of times already here. I see you keep rocking hard, so it’s time to talk a little, so I can ask you few questions…
Hi! We’re ready!

First, you have a name that hates digital press. That “:” in between is a pain in the arse. I love it! Please explain your moniker just to start…
Baev: The original name of our band was Hellion. However when we started to spread to Europe we encountered with already existed heavy metal band with the same name. So to avoid problems with copyright laws we needed to change the name. It was really hard because in our country people new us as Hellion and a totally new name would be a little step back. So we made visual exchange ‘i’ to ‘:’. Of course this name obtained new meaning and now I love it more than previous one!

Fourth album, right? You don’t really rest.. upcoming plans? Another album next year?
Anton: Yes, the fourth one. We are really excited with this work. I think it’s our best release for this moment but not our magnum opus yet. So now we are doing some preproduction of new tracks. Jamming, recording some demos, etc.

Your country, Ukraine, is quite a nasty place: it is terrorizing the whole planet with tons of hot metal, and you’re one of the hottest bands doing it… I’d like you, an eastern band, to tell us western dudes what metal is over there, and how it developed in the latest years.
Anton: Ukraine is not the best country to play metal music. But if you take a look to the other side you’ll see that it’s pretty fucking great place to play extreme music. We have terrible economical situation here, all the people so angry of our criminal government, they are trying to make revolution right now. All this shit can lead us to civil war. So many great themes for metal songs (laughs, editor’s note). It’s joke, of course. Every metalhead in Ukraine knows how hard is to be in band. But every year I see more and more great bands doing great music. I’m owner of recording studio, so I see a progress with my own eyes. One day we’ll kick all over the world’s ass (laughs, editor’s note). 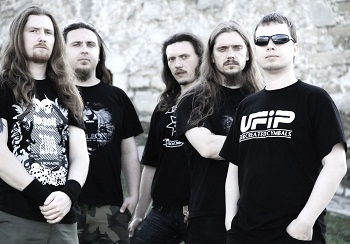 How did you get Andy LaRocque and Marek “Spider” Pajak in? I thought you hadn’t any other soul to sell to get them in…
Anton: We knew Marek from the times when he played with Esqarial (Poland death metal), we played together twice during their tour in Ukraine in 2007-2008. Even those days we were impressed with his playing, he is a real guitar genius. So, when we played at Metalfest open air in Poland in 2012, we met him with Vader and the idea to invite him came up. Regarding Andy, he is a cult for us because of his work with King Diamond, Death (’93). We grew up with his music. We knew that he has his own studio and sent him a invitation to participate our record so, results you can heard on the album.

On “Age Of Oblivion” you were great, with a touch of personal feeling. With “Hunt” you upgraded to a band that is damn great, with such a pervert groove, and a great technique… how did you get to this point? How hard is to keep yourself focused on the band to actually make it grow so much?
Anton: Thank you! I think it’s just the normal evolution of a band. We are working hard, playing a lot, improving our technical skills. We’re seeking, we’re looking for, we’re “hunting”. We just discovered something new and very own in “Age of Oblivion”,  and we bring it to a new level with “Hunt” and trust me, our next album will be more Hell:on than all these four previous albums.

Heavy and slower then faster and killing.  And hysterical way to develop songs and use the guitars. That looks like your own style now… that secret to crate music that is always shocking, that is never how one expects it. What do you think?
Baev: I would not say that we become slower…We become little different. I tried to think over your question and my program hung up (laughs, editor’s note). There are no certain rules for writing. We try to do what we feel and further we try to do almost everything together. So the result is some kind of collective mind. When we start a composing of a new song we see it like this and that. And during the exact composition the song could totally change. We even cut the riffs from which the song had begun and substitute them with other ones.

Live: it’s known you love to play live… and also that it’s quite hard to survive a gig of yours…
Anton: If you survive our gig you’ll be bound to drink with us all night long. And who knows… maybe it’s easier to be thrashed in moshpit (laughs, editor’s note).
Baev: Anton is right – sometimes after gig party is harder then the gig itself. And the gigs are very important for us because our music has more than just music I hope (or I want to). It’s some kind of pure energy. It’s possible to feel it at home listening to the album but you definitely will feel it at our gigs. 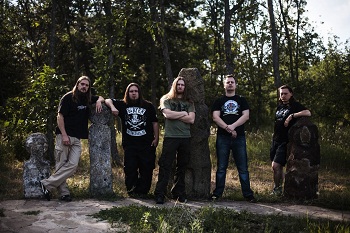 Plans to come kill us here in Italy with some shows?
Anton: Now we’re starting working over the new tour next autumn, and it will be Germany mostly. But if your promoters will be ready to meet us, we will be ready to visit you. We’re open to every offer about where to play. I hope one day we will visit Italy.

Ok, thanks for being so heavy and creative. We love Hell:on here… Before getting back to the next show, please close this with some words to METALHEAD.IT readers … and Hell:On maniacs…
Anton: Keep supporting metal!
Baev: Believe us, Ukraine is not only the Klitchko brothers, Andrey Shevchenko and “orange” revolution. From now on, it is Hell:on also!!! (laughs, editor’s note)