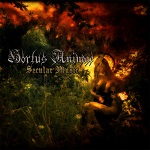 (Flicknife) I was not expecting an album of this level. I did not expect so varied and complex music together. Nine years for a new Hortus Animae album and the result is something amazing. Perhaps for Hortus Animae it was also easy to do, since they have never laid down, they never repeated themselves, never offered the same music twice, they never provided trivial matters. This time again the ensemble from the Peninsula reveals itself as an obscure music machination. Darkness and depressed moments, in contrast to epic or sinister solutions, gothic atmospheres of great effect, even if the substance of the album stands between a darkened death/blackened metal, obscure by the way, doomish at times , and that never leaves the listener in the same place. An evolved sound. The rhythmic patterns of Grom are authoritative, effective and well in tune with the rest of the sound-plot. I find Bless’ touch on keyboards very enjoyable and tasteful, giving a good atmosphere to every juncture. However, it’s difficult to give a complete description of “Secular Music” because it is a concentrated mix of shades yet the whole remains with a precise identity. Hortus Animae turn out to be a sum of things and form a single whole. It’s an hour of music that must be lived and the listening session does not make you tired, but rather gives a healthy curiosity in the listener who wants to understand which direction the music comes from and where it goes. Even the bonus track, “Aqualung ” by Jethro Tull, is a brilliant reinterpretation of a classic rock tune, but done through their own above average character and style.