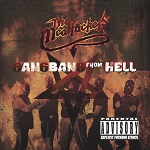 (Autoproduction/Asenath Records) If for you death metal has reached its maximum glory with albums like  “Symbolic”, or you can’t tollerate anything prior to toady’s death sound made with pretentious productions or pumped up by an infallible producer or mastering technician, then stay away from The Meatfückers. Believe a miserable pen pusher of extreme metal, in fact it will be difficult for you to approach such a decisive sound, bare, coarse. It’s death metal from the very beginning, that of the three mexicans, also with some vague thrash/speed metal in the structure of some tracks. Immature songwriting, but at the same time “classic”, seeing as you can hear early Hellhammer, and Slayer, so, an epic estreme sound between the end of the 80’s and the dawning of the 90’s. Stylistically I feel like give these indications to identify the sound of the Meatfuckers, who have a capacity to produce a series of songs which skillfully depict their personal touch, made up of dark melodies infected with evil, from indanity and with down tuning. Rex Lucifer is the agressive, gloomy snarly tarry singer who increases this sepulchral cloak which weighs down the music, even if the imposing wall of sound erected by the guitarist Iracundo and bassist Reverend Damaged triumphs, the latter literally seems like someone who writhes the strings. “Childsodomy” has something in common with the thrash of Kreator (in the early days, obviously), “Hookers Parade” and “Pornorama” are two songs which have the inclination of Slayer (also in this case, in the early days) with less power and double the savage perfidiousness, while “Euroslut” has riffing infected by Tommi Iommi. “Gangband from Hell” is The Meatfückers’ debut album, who however, have a live DVD behind them, “Porn to be Wild”. The band plays live with their faces covered by fetish masks, while the lyrics deal with satanism and sexual sadism. Stuff for “Parental advisory: explicit lyrics”. On the strictly musical level, The Meatfückers are a range of shades which go from thrash e and arrive at Venom style black metal. Visceral and ruthless oldschool.