HULDRE, “we are inspired by old Danish and Scandinavian folksongs and tales” 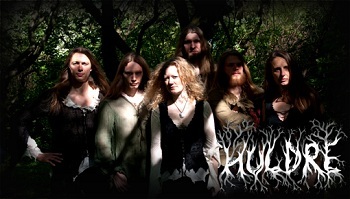 The band HULDRE composed one of the most original and well-written folk album of this year 2012. We talk about it with Laura and Nanna, the two beautiful girls in this six-pieced band. Believe it or not, they have the kind irony to describe their own musical genre as ‘reserved for nerds and old hippies’… happy reading!

Hi Huldre, and thank you for this interview! I hope that we can start from a general presentation of the band and its previous work…
Laura: Hello Renato. Well, we’re 6 musicians in the band: Nanna (vocal), Laura (violin), Troels (flutes and hurdy-gurdy), Lasse (guitar), Bjarne (bass) and Jacob (drums). We have very varied musical backgrounds, but we all have a weakness for both folk and metal so we thought it clever to try combine these interests in a band playing folk metal. Bjarne, Nanna and I got together in 2006 to try form such a band, but it didn’t really work out until Lasse and our former drummer Mikael joined the band in 2009. Mikael later left the band and was replaced with Jacob and when Troels joined us in 2010 we finally had the present line up.

In 2010 we released a home produced, almost-no-budget demo with 5 songs, that we handed out for free at concerts etc. but soon we ran out of stock and in stead offered the songs as free download through our homepage. In 2012 we released our debut album “Intet Menneskebarn” (No Human Child) which contains the 5 songs from the demo as well as 6 other songs – all recorded at LSD Studio in Lübeck, Germany during December 2011.

Can you describe to our readers the music of your debut album “Intet Menneskebarn”?
Laura: Hmmm, it’s more or less an equal blend of Scandinavian folk and metal and even though almost all the songs are written by us (we have couple of traditional folk songs in our repertoire) I think they all have a genuine sound of the “Good Ol’Times” in the North. We’ve been compared with bands like Lumsk and Gåte but maybe with a bit more heavy riffing.

Why have you chosen to write your music in your native language? Don’t you think that this choice can be an obstacle for the diffusion of your music?
Nanna: We are inspired by old Danish and Scandinavian folksongs and tales so it seems natural and authentic to the atmosphere to write the lyrics in Danish. Also – we think it’s unique to sing in Danish and rather than seeing it as an obstacle we think it supports the music in a way that English would not be able to.

In my opinion, “Skaersild” and “Knoglekvad” are the most impressive songs of the entire album. Can you tell me something more about those two tracks?
Laura: Skærsild is a song about a young girl and her battle between the Pagan and Christian beliefs. The different parts of the song support the story as she’s asked what she’s wearing around her neck and what she’s doing in the forest at night and finally admits that it’s not a cross but a hammer. We actually spent quite a long time on this song before everyone were satisfied. We even left the first sketches for about a year before we began working on it again – sometimes songs just need time to “mature” before they’re ready to be worked with. Knoglekvad is about a woman in a sacrificial bog throwing bones in circles and having her dreams floating away with the water. We made Knoglekvad an evening where we thought “hey, let’s try make an up tempo song” so first we wrote the lyrics and then the melodies just happened to pop out of our brains – it’s probably the fastest song writing process we ever had J

Can you explain me the concept behind the strange and charming booklet?
Nanna: We had an idea that our album cover should express the hidden huldre people in the forest. A huldre is a creature from the Scandinavian folklore often described as a female nature spirit, sometimes naked, with the tail of a cow or a fox. She lives in the forest leading people (especially young men) deep into the forest with music and lovemaking and in worst case into death. We chose our photographer friend Kristina Tandrup Gittesdatter/ Njordfoto to create the cover, as we knew she was truly into this gloomy atmosphere too. So we went to the forest a cold winter day, ran around naked (and freezing) and shot pictures, and from that she made our fantastic cover.
Laura: Fortunately a huldre can also be male, which is rather lucky as 4/6 of the members of Huldre are men, hehehe.

Is there in Danemark a strong and vital folk tradition? Do you think that HULDRE is part of this movement?
Laura: During the last app. 10 years there’s been an underground movement in Denmark bringing the traditional folk music to life once again, and there’s actually a lot of young people playing contemporary folk music nowadays, but before that I think folk music was more or less (sorry to all the people I’m offending now J ) reserved for nerds and old hippies and hence wasn’t really strong and vital.

And what do you think about the folk metal scene? Don’t you think that it is a bit crowded place?
Laura: Ehehe, well in Denmark I think we’re 5 bands all in all playing a folkish kind of metal (all VERY different from each other), so I wouldn’t say the Danish folk metal scene is crowded, but of course it’s something else outside Denmark.

Are you actually touring? Is it easy for you to bring your music to a stage?
Nanna: We’ve been on tour with other folk metal bands in Denmark, and often play concerts at different clubs and Viking markets etc. I think our music fits well in many subculture festivals such as folk, folk metal, metal, pagan, role play, medieval and Viking festivals as well as more mainstream festivals. Right now we’re searching for a booker to help us with the contact to different kind festivals abroad, as it’s a huge task to do all by yourself when you have studies, work etc. to take care of at the same time.

Do you think that it will be possible to see HULDRE playing in Italy?
Laura: Right now we’re trying hard to find and book concerts outside Denmark for 2013 and Italy is definitely an option! Also – I lived in Venice when I was younger, so I have a special weakness for Italy and coming back to play would be a great experience to me! We’re open to all kinds of suggestions so everyone should feel free to contact us, as it can be quite difficult knowing where to begin when you’re not a local.

I leave you as usual the end of the interview. Thank you so much and see you soon!
Laura: Well, thank YOU and thank you very much for the nice review of “Intet Menneskebarn” – hope to see you in Italy (or somewhere else of course) some day!