LUCID DREAMS, “We just make music we like, and try not to sound too close to any other band” 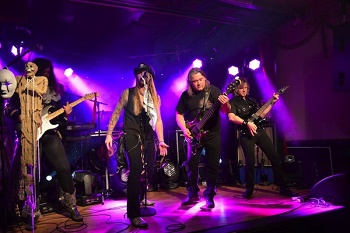 Hi guys, thank you so much for your time! The band is still not well known in Italy so I hope you’d like to introduce it…
Back in 2007 guitar player Rune Hagen, drummer Rune Gutuen and former guitar player Silvester Pozarnik came together and started the band, then came bass player Jan Erik Lysø and Henrik Manfredo on the vocals.  Some of the guys already knew each other from earlier days, and some even from school days, growing up not far from each other in Oslo. The band started jamming and writing songs, did some gigs, and started to attract attention. Then after a while the band wanted to expand their musical possibilities, and at the same time by coincidence Rune Hagen got to know keyboard player Thorleif Østmoe. He joined the band, and the songs were slightly re-arranged to give space to the keyboards. After some gigs Pozarnik wanted to step back, and was replaced by new guitar player Ådne Brandås. His playing style and approach is slightly different to the style of Rune Gutuens, so they are a great match. Some more gigs later Fredrik Sindsen aka. Freddy Vain replaced Manfredo on vocals. Fredrik has a classic powerful metal voice and the band is now more complete than ever.

It is quite unusual to hear of a heavy metal band from Norway, the homeland of black metal…
Yes, we know, many people associate Norway with Black Metal, but there are many good Norwegian bands with other styles, like heavy metal, hardcore, prog-metal, AOR, and such . Black Metal is more extreme both visually and musically, and that is probably why it is so fascinating, and gets more attention outside of Norway than other genres. If you are interested in other Norwegian bands that are not Black Metal, check out bands like Pagan’s Mind and TNT.

Still about black metal: what do you think as a musician and Norwegian of the Black Metal Inner Circle ‘activities’ and its members?
If you think about burning churches, and stuff like that, it is more of a thing that belongs to the past. Most of the Norwegian Black Metal musicians today work hard on their music, and want the music do the talking rather than the extreme “activities”.

“Paranoia” and “Daisy Dukes” are in my opinion the best songs of the album. Can you tell me something more about them?
Paranoia is a fast and heavy track. It has a lot of energy and is fun to play. It was written some time ago, and has gone through some changes on the way. The song is written by the bands former guitarist Silvester Pozarnik with lyrics by former singer Manfredo. It’s all about a creepy manic paranoia feeling, complete with a short “horror movie” introduction on the piano. Daisy Dukes is  a catchy feel-good song about chasing girls in the summertime, and is our first single off the album.  It is mainly written by guitarist Rune Gutuen with lyrics by Manfredo. It has some nice arrangements and we also added a short “weather report” towards the end to add to the summer vibe. It’s a good song to play live, because it is usually one of the favourites of the audience, as it is easy to remember and easy to sing along on the chorus.

I see on your Internet page that you’ve also shot a video of “Diasy Dukes”… what about this experience?
The video is mainly shot on stage and also includes clips from the band on the road, backstage, and in the studio. The song is a about chasing girls and having a good time, and I think the video captures some of that easy feeling. We shot some clips now and then, and it ended up as the video in the end.

Tell me please what are the models of your music… In LUCID DREAMS’ sound I hear a lot of influences, from power metal to hard rock!
We all have different favourites, and you could say that Lucid Dreams may sound like a mix of the music that has influenced us. We all like classic hard rock bands like Whitesnake, Van Halen and Iron Maiden, then some like Metallica and Annihilator, and some like Malmsteen and Dream Theater, just to name a few.. We just make music we like, and try not to sound  too close to any other band. We are constantly writing new songs, and I think we are in a good  progress of finding our own unique sound.

What are now your future projects? Will we ever have the chance to see you live in South Europe and especially in Italy?
We are at the moment working on live dates mainly in Norway for the first half of this year. We are also checking out the possibilities of making a tour in Europe, and would of course love to do some shows in Italy. Nothing is set at the moment, but we will get back to you as soon as it happens.

Do you know and appreciate some Italian metal band in particular? I’m always curious about the impressions ‘we’ leave in foreign countries…
We are sorry to say that we do not know the Italian metal scene very well. We know about Frontier Records and have heard the names of Cavaderia, Bulldozer and maybe a few more… During the years most foreign releases in Norway have been from England and USA, so it probably comes down to marketing, as there surely must be lots of interesting bands from Italy. Today it is easy to check out new mucic, so we should definitely check out more of the Italian scene.

I leave the end of the interview to you as usual. Thank you so much and see you soon!
Thanks ! Just wanna finish of with a big hello to the Italian metal fans. Check out our album !! Hope you like it, and hope to see you  on the road this year. Keep On Rockin’ !!!!